Blurb Writing 1:1 – Behind the scenes of Mustang Rabbit’s Adelaide and the Dragon Castle

There, I said it. It’s hard. It makes us miserable.

And yet it’s so incredibly important to get it right.

I recently launched a new service, Blurb Writing 1:1, to help authors with this vital bit of writing.

Mustang Rabbit, YA fantasy author and one of my clients, has kindly allowed me to share the result of a session we had about the blurb of Adelaide and the Dragon Castle, a novel to be published on the 31st of March.

A little behind the scenes might just give you the pointers you need to write a good blurb yourself.

This is the original blurb Mustang sent me before we had our Zoom meeting. Blurb Writing 1:1 includes a video call in which we talk through your book while I share my screen and show you my live edits.

By order of King Croban: the material here-in is declared forbidden for inciting subversion of acceptable roles, encouraging free thinking, and unacceptable nicknames uncomplimentary to the crown. Report all beautiful sorceresses to the crown immediately. Do not engage in combat alone.

Threatened with marriage to a wife killing lord and abandoned by her twin brother after the death of their elderly master, Adelaide escapes to King Croban’s court, taking her brother’s place as a recruit to the king’s castle guard.

Her plan backfires when Master Lothar, charged with training pages and squires for the kings finds her incompetent and unready to serve. In a fury, he orders her to bring him the head of the dragon who has kept a beautiful lady prisoner in his castle lair. Or be sent back to her step-father in chains.

Scared, and disheartened, Adelaide arms herself with castaway armor and weapons and rides for the Dragon’s Castle. What lies for her beyond the gates is much more than fire and scales. It might even be the answers to the prayers she no longer dares utter. Or it could destroy her completely.

Read this first installment in an exciting new 6+ book YA series by Mustang Rabbit.

After the end of our 60-minute Zoom meeting, we were left with this:

When her stepfather threatens to marry her off to a wife-killing lord, Adelaide takes her runaway brother’s place. But being mistaken for her twin brother comes with a price: the unskilled Adelaide is recruited as a page to the king’s court.

Her incompetence does not go unnoticed and soon the weapon’s master’s fury finds her. Not expecting her to succeed, he orders her to rescue a beautiful prisoner from the dragon’s lair and return with the beast’s head.

Afraid of being discovered and married off after all, Adelaide arms herself and rides for the Dragon’s Castle. But what lies for her beyond the gates is much more than fire and scales. It could mean the ultimate freedom, if only she faces her own demons.

The question is: is she ready to become her own person? Or, will the journey within completely destroy her?

Read this first installment in an exciting new 6+ book YA series by Mustang Rabbit.

Here’s what we did, and why 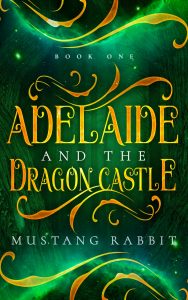 The first bit of text included in the original blurb is an excerpt from the book. Mustang included it because she thought it would be funny, and it kind of is, once you know the whole story. In the book, Adelaide goes against all of these rules.

But, because we don’t know the story yet, nor have any attachment to the heroine, the excerpt causes confusion. I had to read it multiple times and spent too much effort figuring out what the piece meant exactly, instead of just reading the rest of the copy.

It also hints towards some of the things the reader should be dying to find out by themselves. Adelaide cross-dressing in what sounds like a medieval setting is a great hook. Presenting the stakes of such an act to the reader makes for less intrigue, though. And that’s what blurbs are all about.

It’s also a pretty big block of text, and we have to try to avoid those in copywriting. Why? Because people skip over them unless they are already invested in and committed to reading the entire bit.

Putting a big block of text at the beginning doesn’t invite any reader in. What’s more, if you put it at the beginning of an Amazon description, your potential reader only sees the first bit of that block. They have to click ‘Read more’ to get the rest. If you put something at the beginning readers intent to skip… It’s not the best strategy 😉

Too many people and names

Mustang’s original blurb includes eight characters, of which three have a name. That’s a bit much for a blurb, because readers know that only those things that truly matter are included there. Including so many different characters and names can leave a reader overwhelmed, and I don’t think I have to explain why that isn’t a good thing.

During our Zoom session, Mustang and I boiled it down and we were left with six characters, of which only the main character kept her name. It’s so much easier now to glance over these other characters and focus on the most important one.

(That said, we cut even more people in a later revision. Stay tuned.)

When I read the original blurb, I was left with the following impressions and questions (read: reader’s expectation).

I don’t know what that says about me, but I didn’t feel that bad for Adelaide and nor was I rooting for her (I don’t do perpetual victims really well, clearly 😉).

When talking the plot over with Mustang during our Zoom session, I realised that these were simple discrepancies.

This is why we tweaked the original blurb the way we did. We focused on her original action (taking her brother’s place), the first obstacle (her being summoned), and then the second obstacle (her having to face the dragon), including the why of her going on that mission.

No piece of writing is ever finished. I know you know that and I know you don’t like that. At all. I don’t like it either, but it’s the way it is. And it makes sense, too. We change, the world changes, the words we use change, and their connotations shift as well.

Whenever we’re done with a piece of writing, we’re done for now. In that moment, that’s what we were able to come up with. And that’s OK. There’s a reason why everyone should reread their blurbs at least once a year to see if they need any tweaking.

The same happened to Mustang’s blurb. It’s been a few weeks since we got together. When I asked her whether I could use our session as a showcase, I reread what we came up with. Immediately, I saw room for improvement.

That’s how it goes. It’s the reason why Stephen King advises you to step away from your manuscript for a few weeks before you return to it. You see so much clearer once you have had a bit of distance (and that doesn’t just go for writing 😉).

So, here’s what we came up with this morning:

Forced to marry a wife-killing lord, Adelaide knows only one escape. But disguising herself as her brother comes at a price.

When the unskilled Adelaide is summoned to court to serve as a page, the weapon’s master’s fury soon finds her. Wanting her to fail, he sends her on a quest to slay the dragon that’s taunted the court for far too long.

Afraid of being found out, Adelaide rides for the dragon’s castle. But what lies beyond the gates is so much more than fire and scales. It could mean her ultimate freedom…

…if only she faces her demons.

Is Adelaide ready to become her own person? Or will the journey within completely destroy her?

Find out in this first book in an exciting new YA fantasy series by Mustang Rabbit. Grab your copy today.

What did we do this round?

In removing one big text block during our first attempt, I kind of glanced over the fact that the new version still started with a rather big piece of text. Let’s just say it’s a good thing Blurb Writing 1:1 comes with a 90-day tweak period…

It’s one thing to start the blurb with a hook (which you should), but another thing altogether to make it look like one. In the new version, I took some of Brian D. Meek’s advice on tricking a reader to read on. We also got rid of some more detail, as you can see: we are left with only 136 words including CTA and 116 if we exclude it. That’s great.

We are left with only four characters. This brings us so many more hooks, and more hooks means more intrigue.

The reason I got rid of the beautiful prisoner in this version is because I wanted to make sure no potential clichés made it into the blurb.

Why ever not? Because that’s what the novel does, turning that cliché on its head completely. As such, leaving it in as is comes with more risk of messing up the reader’s expectations than cutting it does.

Besides, it’s not a warning the reader needs: which dragon doesn’t keep a damsel prisoner? No reader is going to be upset that it hasn’t been mentioned before, trust me.

Side note: obviously, if that’s what your book is essentially about, you do have to mention it. Mustang’s book is about Adelaide’s journey. While the woman in the tower aids her on that journey, the reader doesn’t need to know more than we already give away: Adelaide is going to find something inside those castle walls that’s going to turn her whole life upside down.

The original blurb had a call to action, which is great. So many authors forget that step. In our first attempt, we left it the way it was. In the second attempt, we shortened the first part and decided to give the reader even more direction, to end on a strong note: Get your copy now.

Please not that, technically, the CTA is not part of the actual blurb. A blurb is what you put on the back of your book if you do print copies. The Amazon (or Kobo of what have you) description is your blurb plus your call to action.

While the first attempt is much more focused than the original blurb we started with, the second version is even more to the point. We rid it of all possible distractions. Or, in Mustang’s words: ‘This version really boils it down to the emotional experience and the triggers, without much else.’

And that’s exactly what you should be aiming for when writing your blurb.

In the end, patience is key. You’re not going to write a great blurb in one day. It’s going to take some rewriting and revising.

It’s also not something to be done alone. You wouldn’t publish your book without letting anyone (whether professional or layman) have a read—or I hope you won’t. Ask for advice. Post it in a writing group. Take those comments and try again.

Whatever you do, don’t give up. Like fiction writing, copywriting is a skill. Give yourself the time needed to become better at it.

Now go give it a try.