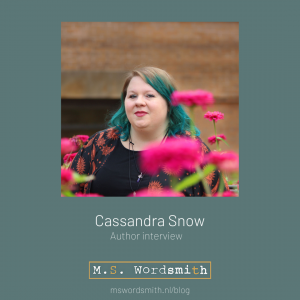 Cassandra Snow is a writer, tarot teacher & reader, and theatre artist living in Minneapolis, MN, where they live with two bossy cats and their favourite person who isn’t bossy at all. Cassandra penned the Queering the Tarot column at Little Red Tarot and TheColu.mn, which turned into the book, out now, from Weiser/Red Wheel books. Cassandra’s second book through Weiser, Queering Your Craft: Witchcraft From the Margins, will be out November 1st and can be pre-ordered through Indiebound, Bookshop, Barnes and Noble, and Amazon.

Cassandra’s next tarot class is Fat Tarot: A Tarot Class for Fat Tarot Lovers & Learners and is available online so anyone can take it! It’s through The Rose Academy of Burlesque in Minneapolis, MN. Cassandra publishes FREE tarot content on their Instagram and you can support those efforts through their Patreon.

To stay in the loop, sign up to Cassandra’s newsletter here.

I’ve written off and on my entire life. I remember getting very angsty in third grade when this girl beat me in a story contest because she used the word ‘exhilarated’. Even so, I didn’t consider it as a career until I’d been reading tarot professionally for a while. I started the Queering the Tarot column (which was a column before it was a book) for a local online newspaper called TheColu.mn and immediately remembered how much I loved writing and decided to start pitching more.

My senior year of high school it was definitely something I was considering with a lot of seriousness, but other dreams took hold and it wasn’t until I was regularly posting Queering the Tarot articles that I realized I want to really do this. I asked my editor at TheColu.mn for more work and ended up as contributing arts editor. That newspaper has since folded but I think there’s not really any coming back from a dream role like that unless it truly wasn’t for you! I am a writer forever now. 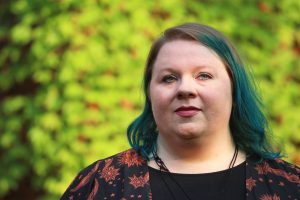 Queering the Tarot was interesting because I’d written so many columns that I think people assumed I could whip the rest out in six months. When I went back and reread those early articles though, I really did want to basically scrap the Major Arcana section and start from scratch. All in all, it did take about eight months but they were a much harder eight months than I thought they’d be!

Queering the Tarot is basically a tarot text for queer readers and seekers. I like to include personal anecdotes when I write and the tarot has been such a big part of my life for so long that I had scores of them to pull from, and I really wanted to tell a story of healing and support because that’s what tarot has meant to me through the years. Because of that, it sometimes gets listed as ‘part memoir’, but it’s definitely a tarot book, first and foremost. 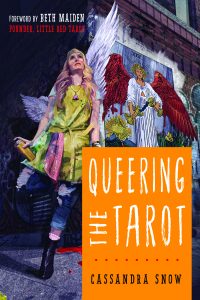 I’m reading Queering the Tarot at the moment and I’m thoroughly enjoying it! What are you working on right now?

I have a second book coming out from Weiser Books called Queering Your Craft: Witchcraft From the Margins on November 1st. It’s a beginner’s witchcraft book, but I wanted to present something inclusive that talked about questioning and deconstructing why we do things. Witchcraft has also been a huge saving grace for me in my life, but a lot of stuff didn’t work or sit well because of trauma, gender, sexuality, chronic pain, and so many other reasons. This book is definitely a witchcraft primer, but I leave lots of space for your own process and discovery.

Once that’s out, I’m going to rewrite some of my Tarot zine workbook series and start pitching that series to agents and publishers. I also have a YA Novel I’m consistently working on and of course what writer doesn’t have a backlog of other projects they could go on about forever?

I also write cute little comics about my experience with sexual dysfunction. It’s been a great way to blow off steam and try to make queer community around a lesser known (but fairly common) situation.

Enough on your plate, from what it sounds like! So, what is your writing process like? Do you plot or do you just dive in? How many drafts do you go through before the work is final?

It’s honestly so different every time. The barebones are that I definitely do an outline. I often storyboard with index cards, even for non-fiction. I like to see how things will or won’t flow, and being able to move index cards around helps a lot with that. The last time I proposed a book, the proposal served as the outline but it really wasn’t flowing well until I started moving index cards around.

That being said, with a book proposal, you explain why you’re doing the project, why you’re the person for the project, and other crucial points that people often don’t solidify before they start writing. That was so useful that now I write a book proposal before starting every project and just remind myself not to get married to the outline as written. 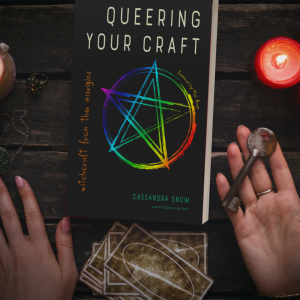 I have really, horribly bad imposter syndrome. I know everybody does but mine is bad enough that it genuinely halts the process so much. I also just feel abject panic or terror when I see there’s a new review up or that I’ve been tagged in anything. I have a couple different anxiety disorders, which is the culprit here, and it’s difficult to reign that in.

In the actual writing process, I’d say that while I’ve found workarounds, I frequently struggle with trying to force the piece to match the outline step by step instead of mixing things up to get a better flow. I probably waste a lot of time trying to just make things work without changing them when it’d be so much easier just to move stuff around!

What advice would you give to writers dealing with the same or a similar struggle?

In terms of anxiety and imposter syndrome, I would say first and foremost that I’ve learned the hard way that those aren’t things you can fix overnight or in an anxious moment. If they affect your life outside of work, they will affect your work and your willingness to do it, too. Not everyone has access to therapists and therapy, and not every therapist is good, but even researching ways to overcome anxiety and genuinely doing that work all the time—not just under duress—is really the only solution.

But I would also say to them that your voice, your outlook, your story ARE necessary. There is, arguably, a finite amount of ideas but there is an infinite amount of ways to cover those ideas. What you’re doing or want to do is beautiful, I promise.

In terms of getting too attached to your initial ideas or outline, I definitely recommend storyboarding in a way that allows you to actually move pieces around! It’s so much better! That way you don’t feel like you’re butchering your actual piece until you see that it works better in the storyboard.

I couldn’t agree more with you here. That’s one of my pitfalls, to be honest, to stop the work when I’m doing well. Have you always had that struggle or has it changed over time? 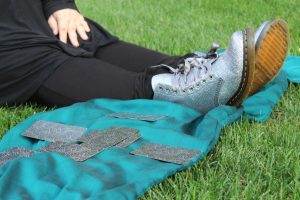 The anxiety struggles I’ve definitely always had. In my other life, I’m in theatre and they’re just as bad then. I panic before almost every opening night. Even before a rehearsal process starts, I slip into ‘what if the actors and crew all hate me and don’t have a good time on this show?’ So, it’s definitely an ever-present force in my life.

The actual issues with writing and trying to force things—that’s kind of shown up over time. It’s really been since my work has been published that I’ve just…forgotten that you can edit and move things around? I think when you’re just writing for yourself, the actual issues in your writing aren’t as apparent. It’s not until you realise people will read it that you’re like ‘OH’.

I guess that’s why Louise Erdrich advices every writer to pretend to be writing in secret—much less scary! Do you prefer the term ‘writer’ or ‘author’, and why?

I like both—no preference, really. I consider myself a writer since I also do articles, social media content, etc. and not just books, but I definitely love the weight that others calling me an author gives my writing.

Eep! I have so many! I’ll stick with living canon just to make this shorter. For non-fiction, adrienne maree brown has completely altered how I think and approach my work—in my career but also just in my life as a queer person, activist, ally, etc. I absolutely adore Leah Lakshmi Piepzna-Samarasinha for the same reason. 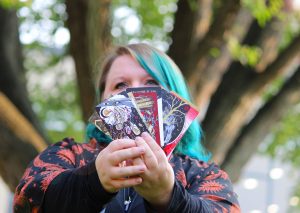 For memoir, I can not get enough of Samantha Irby or Jenny Lawson. I think they’re so brilliant. Allison Bechdel is really important to me too.

For fiction, I really run the gamut! I love Sarah Gailey and Catherynne M. Valente even though I don’t write fantasy or anything in that vein. Those books really help me disappear when I need to. I love literary fiction. I love pop fiction. I adore queer romance and queer YA. I just love books so much.

For my field, witchcraft and tarot, I think Gabriela Herstik’s work is so approachable and wonderful. I think Lisa Marie Basile is a genius. Theresa Reed is my forever hero. Mat Auryn just has the one book so far, but it’s one of the best ones out in the past few years, in my opinion. Lon Milo DuQuette is sort of an ‘off brand’ answer for me, but he makes the occult seem so accessible and I think that’s so important. Again, I could go on forever here.

Then you’re going to love this one: what’s your favourite book?

I definitely can not pick a favourite book! Ha! I guess under duress I would probably blurt out either Emergent Strategy by adrienne maree brown or, oddly enough, Graveyard Book by Neil Gaiman, but if you ask me this same question I’d probably have different answers. I will say I just finished Allie Brosh’s Solutions and Other Problems and scream-laughed until I cried at 2 AM in my room so that one’s probably gonna stand the test of time too. 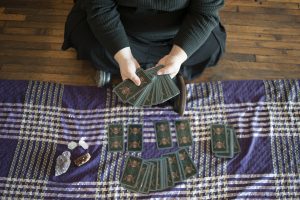 And…what’s your favourite book on the craft?

I do love Bird By Bird by Anne Lamott and On Writing by Stephen King, which I am sure are answers you get A LOT. I love books on creativity like The Creative Habit by Twyla Tharp and The Artist’s Way by Julia Cameron. I like anything that gives you tips, guidelines, general info, and prompts but really leaves space for you to find your own way.

Yes, I get those all the time, but no one’s mentioned The Creative Habit before! I’ll have to look that one up. So, last but not least, what’s the best writing advice you were ever given?

So, the storyboarding thing and the idea of moving index cards around came from Diana Rose, who did a killer astrology reading for me, and as you can see from this interview it was a total game changer. Also! Everyone should hire her! Her website is here!

Cassandra, thank you so much for taking the time to answer my questions and for sharing your story. I personally can’t wait for Queering the Craft to come out. Only a few more weeks!