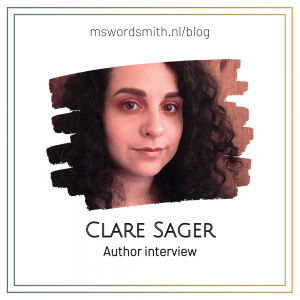 Pirate Queen and wordsmith extraordinaire Clare Sager is a former lecturer turned fantasy author. With both a bachelor of arts and a masters of arts in Creative Writing, she writes stories of swoon-worthy, troublesome men and strong, sassy women who can handle them.

When she’s not writing or master planning her next book, she’s an editor, outline coach, and self-publishing consultant. In her spare time, she enjoys cycling, reading, and sewing beautiful creations. Her stationery addiction knows no bounds, with a washi tape and fountain pen collection to rival that of a stationery store, she loves to spend time chilling with her bujo planning world domination. She likes cats, coffee, and speaks fluent sarcasm.

Hi Clare, I’m so glad you could make the time for this! Let’s dive right in: when did you start writing, and why? 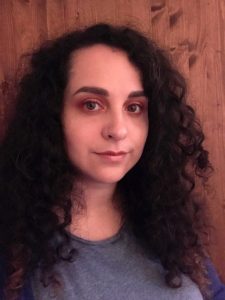 I’m afraid I’m one of those annoying people who started young (not in the womb, but…). When I was about eight, my dad got a PC (black background, green text – old school!) and I started writing semi-fictionalised diary entries as a way of processing the things happening around me.

I was about twelve when I sat down and declared I was going to write a novel (I didn’t! But I started one.). I’d always consumed books and when I found out that people wrote them, I knew that was something I wanted to do one day.

That’s a tough question. I think it wasn’t a one-off thing, it’s something that’s evolved over time. When I was twenty-one, I switched degrees to a BA(Hons) in Creative Writing and English and that was one step. A year after I finished that, I started a Masters’ degree and that got me into a daily writing habit and taught me more about writing a novel. It wasn’t until I was thirty-one that I actually finished a novel, though, and that was all because I had a health scare.

HAHAHAHA! If you can believe it, nine years! That was from starting the first draft to publishing, with a cross-country move, a whole new career, getting married, and lots of time spent not working on it in between.

Stolen Threadwitch Bride is part of a collaborative project I was invited to work on with seven other fantasy romance authors—we all wrote our own take on the stolen bride trope. Other than the word length and the fact the stealing had to be done by a fae, the brief was pretty open. STB is an enemies to lovers romance about a fae-hating human woman who’s taken as part of a centuries old bargain… but he doesn’t want to marry her, only use her ability to sew magic into clothing.

There ended up being a lot of personal touches in this story. Ariadne lives with anxiety, which has been a constant companion for me throughout my life. Her threadwitch magic was also a chance to write about my hobby—I’m a qualified corsetière and back in the days when I had free time, I used to make my own clothes. I even made my wedding dress and have shared some photos of it as part of my promotion for the book.

At its core, though, Ari’s story is about finding strength, belonging, and a voice, even in the unlikeliest of places.

I’m taking a short break after finishing two books in quick succession, but after that I’ll be working on the last book in my pirate series, Through Dark Storms. I’m both scared and excited at the prospect of finishing the story! 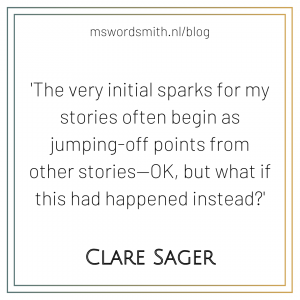 As am I! I can’t wait to read it, but I’m not looking forward for the series to end either… (Clare is one of my favourite authors right now, FYI).

So, what is your writing process like? Do you plot or do you just dive in? How many drafts do you go through before the work is final?

I am a huuuuuge plotter! A story starts off as a vague idea that gets noted down, then, when I’m working on other things, more ideas start coming to me—characters, backstories, snippets of dialogue, events that could happen, even entire scenes and plot threads. I note all that stuff down because otherwise I’m guaranteed to forget it.

By the time I start work on that book, I’ll often have the bare bones of the story in place already. I’ll then supplement that with reading and research around the subject, which fires off more ideas. Then I organise that into a loose structure across the series and a tighter scene-by-scene plan for the first book.

I work with a timer and an app that tracks my words and time spent on different parts of writing (WordKeeper, I think it’s iOS only). I generally get into flow and go past my alarm, but the timer keeps going in the background, so it’s all still tracked. I now have a decent idea of how long it takes me to write a book of a certain length, including research, outlining, drafting, and editing.

It’s hard to put a figure on the number of drafts I do, because I do my big structural edits while the book is still in outline stage and often have crit buddies look at that before I start writing. Once I’m happy with that, I drop in all the snippets I already have (dialogue, etc.), and that bulked up outline ends up pretty long (a recent one was 35,000 words for a 140,000-word book).

That sounds quite extreme and has shocked some of my author friends, but it makes things easier for me (and most of those words have been jotted down on my phone over months or even years as they came to me). It has all the details I need to remember and takes care of all the logistics, like introducing an object in scene 5 that will be important at the midpoint, etc. That way when I come to draft that scene, I can just enjoy writing and playing with the action and dialogue because I know where it starts and where it needs to end and don’t need to worry about it.

As I draft, I also cycle through my words. Although I’m not a discovery writer, I use the cycling technique from Dean Wesley Smith’s Writing into the Dark book/lecture. So I’m constantly tightening up my words and using that reading back over my earlier words to get me back into the story world. By the time I’ve written the last scene of the book, I probably have around 3/4 of the editing done.

Impostor syndrome, definitely! I can get quite embarrassed when there’s attention on me or one of my books finds some success. Friends often have to remind me to share my successes widely, because that goes against my instincts.

A bit like taking myself seriously as a writer, I’d say it’s evolved over time. It started as more of a fear of being exposed—that idea that you can subconsciously reveal a lot about yourself in a novel without realising, or that people will read things into a book and assume they apply to me. Once I pushed through that and published, the focus shifted more to what I’d call impostor syndrome. 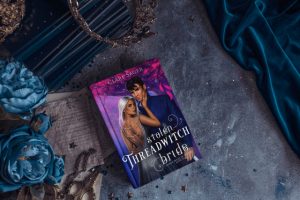 Get good writer friends! Honestly, I’ve been so lucky to find some wonderful author friends who really support me and coax me into putting myself/my work out there or kick me up the bum when impostor syndrome is winning.

Also, understand that loads of people have it, even those you look up to thinking, “They’ve made it! When I’m up there, I won’t have to worry about this anymore!” Earning six figures won’t make it magically disappear, so understand that and start working on it now. It’ll be easier if you can cope early on rather than waiting until you’re at six figures and realise that spectre is still there!

I hate the term writer’s block! It gives too much power and mystique to a whole myriad of reasons why you might be struggling to write. 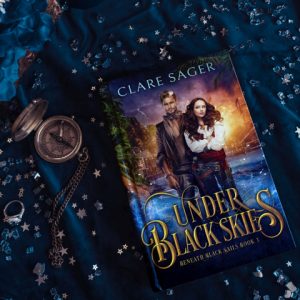 I often find if I’m struggling with a particular scene, it’s because there’s something wrong. Maybe my plan is wrong or doesn’t have enough detail to deal with a complex scene with lots of moving parts. Or perhaps I’m spending too much time on X when it could happen off screen or I’ve misjudged a character’s motivations, etc. I take a step back and journal about the scene and my concerns and what I’m feeling, and that usually helps me tease out the issue. Then I jot some notes by hand to re-plan the problem area, and that usually lets me continue writing.

Keep up with input—reading and consuming story and non-fiction (TV and film included). The very initial sparks for my stories often begin as jumping-off points from other stories—OK, but what if this had happened instead?

I try to keep curious and give my brain quiet time—going for a walk, doing the dishes—things where my body is occupied, but my brain doesn’t have anything to do (no podcasts or audio books, but I’m OK with music). I let myself fall down research rabbit holes, but at the time I say, not during writing time. And I note down all those bits and pieces, even if it’s just a sentence, because often one idea will combine with another in an interesting way and that’s the spark of a new story.

I struggle to pick just one, but I read Holly Black’s The Folk of the Air series last year and loved it, so that’s a recent favourite! I’ve also been in love with The Bloody Chamber by Angela Carter for a long, long time. 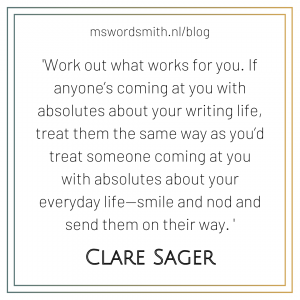 Again, I don’t think I could choose just one, but a few that have made the biggest changes in my writing life, which I reach for again and again are:

To work out what works for you. If anyone’s coming at you with absolutes about your writing life, treat them the same way as you’d treat someone coming at you with absolutes about your everyday life—smile and nod and send them on their way. Everyone is different—your process, your reasons for writing, all of those things will be different too. Embrace that and enjoy!

Thank you, Clare! It was so good to finally have this conversation with you!

If you want to find out more about Clare (and I highly recommend you do), you can find her on her website and on Instagram.

You can get Across Dark Seas, the prequel to Clare’s Beneath Black Sails series, for free here, and find the first book in that series here. Stolen Threadwitch Bride, Clare’s latest book, can be found here.

For editorial/coaching/consulting services, you can contact her at Clare AT claresager DOT com.