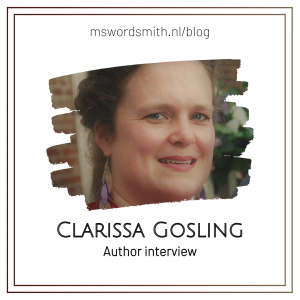 Clarissa Gosling has always lived more in the world of daydream and fiction than in reality. In her writing, she explores purpose and belonging across worlds. Having never found her own portal to faeryland, she is resigned to writing about fantastical worlds instead.

She now lives in the Netherlands with her family, where she writes as much as they will let her. When not reading or writing, she drinks too much tea and has a burgeoning obsession with Bundt cakes.

Clarissa is the author of the Dragons of Kaitstud and Lost Princess of Starlight YA fantasy series, and the Expat Life series of non-fiction guides for families moving, and living, abroad.

She is an admin for the 365 Writing Challenge, an international writing support group that supports writers to build the habit of writing. And she is one of the co-hosts of the Reading Queens podcast, which discusses mainly young adult fantasy books and their major tropes. 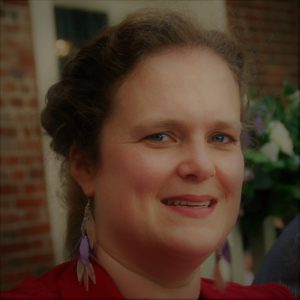 Hi Clarissa, welcome to my blog! Let’s get started with the first question: When did you start writing, and why?

I’m not really sure of the answer to this. Writing is something I’ve wanted to do more of for years. I have a whole series of notebooks full of the beginnings of ideas for stories, some more fleshed out than others. But it was only when my daughter started at preschool in 2016 that I started actually writing more consistently.

I joined a group called the 365 Writing Challenge, which is an online accountability group to support writers to build a regular writing routine. I initially set my daily goal to 100 words as that was something I knew I could do. I worried that I wouldn’t have time to consistently get out my laptop and switching it on, so I planned to write by hand in a notebook. And that was what I did to start with.

Then, after a couple of months, I got into the swing of the story and calculated how many notebooks I’d need to write out a whole novel. By then I was more confident in my ability to write every day, so I switched to typing and I haven’t looked back.

Now I am an admin for the group and help support other writers who are in that same position I was in, as well as still using the accountability support myself. You can find out more about the group here. 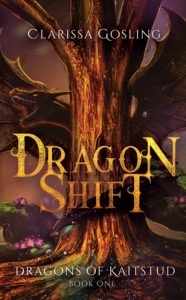 Thirty-seven I think, which is when I published my own fiction for the first time. But this is still a work in progress, as often my writing time is usurped by other things that are more urgent.

I use both interchangeably.

The first novel I wrote took fifteen months to draft. It was something I wrote to learn how to write a book, and I had no plans to publish it as it was just for me. I have no intentions to revise it, so it is still in first draft form. I do still like the story idea, but I am sure that it would be easier to start again from scratch rather than trying to edit it!

My last book, Fae Fair, was the story of a girl who accidentally found herself in Faery whilst riding her horse. There she finds out that she is a long-lost fae princess. 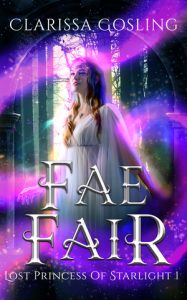 I am finishing the edits on Dragon Heir, the second book in my YA fantasy series. It publishes on the 30th of November, 2021.

I have tried to write without a plot, but I find myself frozen as I don’t know where the story is going. Then the characters drink far too much tea while I try to work out what it is that is going to happen next.

So I do plot, then I leave the story for a few months and work on something else. When I come back to it, I go through the text two or three times before I send it to beta readers. I incorporate their comments and then use ProWritingAid to check grammar and other things before I send the manuscript to my editor. I go through her comments and changes, make any other edits I’ve thought of in between times and, as a final pass, I get my computer to read the text out loud to me.

Ensuring that I include enough description to ground the characters in the scene and for the readers to be able to visualise them.

So far that has been the main thing I’ve struggled with. 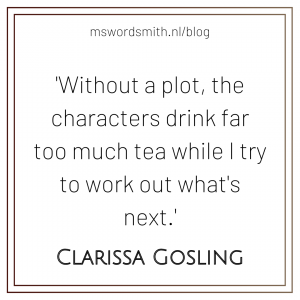 Tackle one thing at a time rather than trying to do everything at once. I focus on working to make my story better rather than perfect. I am going to look at it again, so it’s not the finished product yet.

I have, when I tried to write without a plot. So coming up with a plan and knowing where the story was going helped me with that.

I have a poster of the cover image and the blurb hanging over my desk to inspire me. 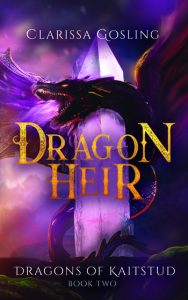 I’ve recently finished This Is How We Lose the Time War and that has become one of my favourites. It is a beautiful story.

I use One Stop for Writers all the time. Although it is an online resource, it is based on The Emotion Thesaurus and other thesauri by Angela Ackerman and Becca Puglisi. It is an amazing tool that includes all of the information from their books combined with interactive tools to help you develop characters and more.

Write to tell yourself the story and then edit it later for other readers.

That’s some wonderful advice, Clarissa. Thank you for sharing it with us.

You can find Clarissa on her website and on Instagram. All the links to Dragon Heir, which comes out on 30 November 2021, can be found here.