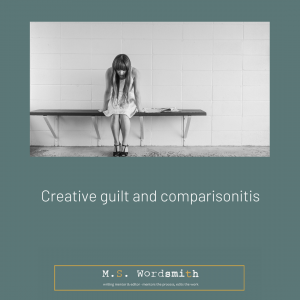 Feeling guilt or even shame around our creativity is nothing new…

…but I see more people dealing with it these days.

After all, aren’t we all supposed to be locked inside our homes waiting for this to pass?

To start, that’s obviously not the case. We’re not all locked inside just waiting about for better days to come.

Some of us—those we’ve been calling the frontliners—work more than ever, under more strenuous circumstances than ever.

Some of us locked inside our homes are still working as well, and a few of those might even be working harder because their line of profession is asking that of them right now.

Some of us have kids who they are supposed to homeschool.

Some of us have all of the above and then some.

Yes, there are people waiting out this pandemic who are bored out of their minds, but, for a lot of people, life as they knew it kind of went on or got harder.

And yet we’re all being shamed and guilted in not feeling enough, in not taking this ‘opportunity’ to finally learn that language, finish that book, become fit (what? If there’s one thing I’m not becoming these days, it’s fit).

You can’t thrive when busy to survive, or you shouldn’t have to

I’m anything but a hard scientist, so I have nothing to say about whether our current threat is as bad as the media makes it out to be. But, no matter how dire the situation is, the message we are being fed is that this is a CRISIS, a PANDEMIC, and you have to be really chill and collected to let none of the ‘What’s happening?!’ and ‘We’re all going to die!’ get to you.

I’m rather chill and collected and ‘It is what it is’ and ‘This too shall pass’ but it gets to me as well. Even if you turn off the media, there’s still your family, your loved ones, your friends, the people you ‘run’ into when you go on that essential trip. Very few of us are momentarily radiating chill and, whether you like it or not, that will affect you. Most of us anyway. 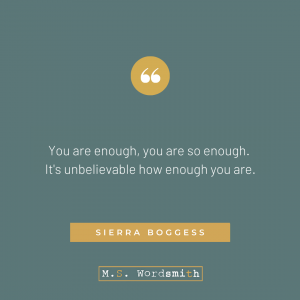 To thrive, you need to have your basic needs covered. Feeling safe is a basic need and so many of us have been feeling anything but safe. Those are not ideal circumstances to create. That doesn’t mean no one can create anything right now, because people still are, but I’ll repeat: feeling unsafe is not ideal when it comes to creativity.

If your feeling unsafe impacts your creative output, that’s one of the most human things that can happen to you. You can feel sad about that, or angry about that, whatever you need right now, but there’s absolutely no need to feel guilty or embarrassed about it. No matter what other people say.

Even if you’re literally doing nothing right now but sit on your couch (or lie next to your pool) trying not to lose your shit, it’s OK. If that is what you need to get out of this with your sanity and will to live intact, so be it.

It is what it is, right?

Even though my life didn’t change much, aside seeing even less people, I have been feeling guilt about not doing more than I already am, too. Things like that just get to you, especially when the going is more tough than usual.

What I’ve also been experiencing is guilt—and perhaps even shame—about not being too affected by any of it.

Sure, the first week of the lockdown here—which includes having to send a text message to the government if you need to go outside for something essential—I thought I was losing my mind. Not because of me, but because our town council refused to give the charity I work for special permission to continue to feed and look after our stray cats. For days, we didn’t know what was going to happen. Were they just going to let them die?

The town council would have, but the Animal Party worked around the clock to get at least some of us the paperwork needed to be allowed near our feeding stations. As soon as I learned we could still feed them, most of my worries dissipated and I could breathe again. And focus on work and my writing.

But that’s when another kind of guilt showed up. The guilt of being the one able to ‘just’ get on with it.

What? Are you dead inside or something?

I don’t know about you but I’m rather familiar with this one. To me, it relates to the guilt one can experience when being the first person after a break-up to find a new partner. The first person (or one of the first) to pick up the pieces after whatever kind of catastrophe takes place. It’s about being the one who doesn’t break down or becomes paralysed in times of crisis. 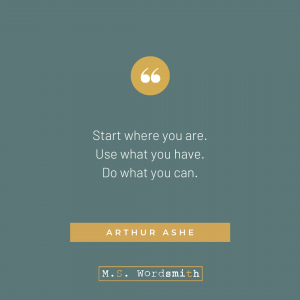 I’m that person. When the shit hits the fan, you can rely on me. Suddenly, I become the most practical, pragmatic person you’ve ever seen and I’ll do what it takes to get us out of the situation. I act fast and pretty much without blinking an eye. It’s only afterwards, when the storm is over, that I’m floored by fear of everything that could have gone wrong.

Obviously, most people don’t get to see that last bit (because I usually let that out when I’m alone in the shower). They see the me who isn’t showing any emotional strain or signs of desperately needing to break down. They don’t witness the aftermath, once the adrenaline wears off.

If we were, we wouldn’t be feeling all this guilt now, would we? 😉

A kind of privilege

Whether or not you’re able to ‘just’ get on with it because you function like I do or because this is just who you are, it can feel very privileged to be able to keep going. After all, in a society where being able to thrive against the odds is highly valued, not letting anything stop you is considered a marvellous trait to possess.

Like all other sources of privilege, this, too, can cause guilt. After all, who are you to be less affected than those around you? Why are you in a position that allows you to get a move on? What did you do to deserve a job that just keeps on going or, worse, does even better now, while others are losing their livelihoods?

Depending on how you view the world and your position in it, having privilege one way or the other can really get to you. It can be paralysing in itself, feeling just how unfair it is that you have something that others don’t, especially if it just landed in your lap because of who you are. But, while you can’t necessarily change what you look like, where you came from, who you love, and so on, you can anticipate on your privilege.

Instead of beating yourself up over the fact that you happen to be in a position right now that allows you to continue to create—whether that is due to hard work or just because you were born in the right place, with the right gender, the right colour, and so on—you can choose to be supportive of others instead.

For example, you could refrain from judging others for how they are dealing today and show empathy or a basic understanding of their individual circumstances. As far as support goes, that goes a long way. You could also show awareness of your own circumstances when you boast about your achievements, because, yes, you’re still allowed to be proud of what you have accomplished. It’s only when we deny our privilege that people get a little frowny and eye-rolly.

Comparison is not supposed to be a stick

While I believe comparison can be very healthy and a source of inspiration, an invitation to check in with ourselves whether we’re still doing the best we can under our own individual circumstances, that’s often not how comparison is actually used. All too easily, comparison turns into a stick we can beat ourselves, and others, senseless with. 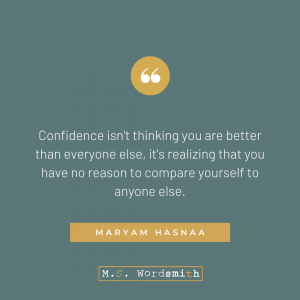 Both guilt and shame, no matter what it’s about, thrive on comparisonitis.

The thing about shame is that it makes you feel so lonely and so abnormal you don’t reach out to others who might actually be going through the same thing.

When it comes to guilt, it’s about doing better or worse than those around you. You feel guilty for not getting as many words done or pages revised as your writing buddies. You feel guilty about hating homeschooling and feeling depleted by noon while other parents seem to be super thrilled about spending more time with their kids. Or, you feel guilty because so many people seem to be suffering more than you or are not able to seize the opportunities that you see amidst all this mess.

Shifting from ‘shoulda coulda woulda’ to a simple observing of reality

Whatever your particular shame or guilt is about, it makes it so much harder to be honest about where we are and how we’re dealing with it. It prevents us from connecting to those who are experiencing the exact same thing and who could use hearing they are not alone in this.

If anything, that’s exactly what we need right now, those kinds of connections. And the only way we can achieve that is by shifting our mindset so we can step away from any feelings of not-enoughness. Instead of approaching our current situation from a place of ‘This is what I should be doing or where I should be right now’ (because that’s what others are doing or are expecting of me), we could instead step back and try to simply observe what it is we are doing and where we are.

For most of us, this current situation doesn’t compare to anything we’ve gone through before. So, why do we even think there is a way we should be behaving right now? All we can do is discover how we are coping during these times and make do with that in the best way we can. Nothing less, and nothing more.

If you need more than just this blog to remind you that you are enough and all you can do is start where you are, using what you’ve got, print these and hang them somewhere you can see them. 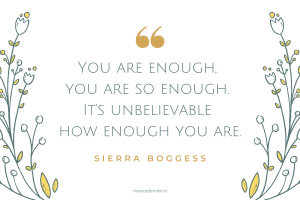 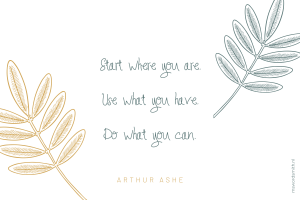 2020-04-27
Previous Post: To hyphenate or not to hyphenate - Editing tips and tricks
Next Post: Emma Dhesi's Build Your Confidence - An interview