Give yourself permission to fail (with downloadable permission slips) 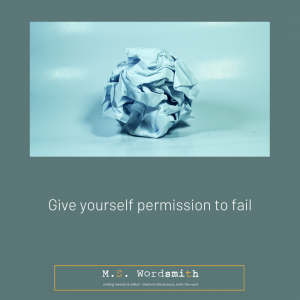 Failure is the mother of success, someone once said.

Yes, I’m all for giving credit where credit is due, but it looks like too many people have said it. And they’re all right. Failure is the mother of success.

There is no creative process without failure. You can’t innovate without making mistakes. It’s all trial and error, and hoping something eventually sticks.

But that’s not really how we do things these days, do we?

First of all, we don’t seem to have the patience anymore for real trial and error. While I believe in the power of letting go and letting be, I hear ‘It’s just not for me!’ much too often, and from people who aren’t even close to taking the actual plunge.

(For the record, taking one or two classes of something or trying a new habit for half a week does NOT equal taking the plunge.)

Rumour has it Thomas Edison needed between 3,000 and 6,000 attempts to create the lightbulb. Do you want to imagine a world where he’d given up?

Likewise, J.K. Rowling’s first Harry Potter novel was rejected twelve times before she found a publisher. Do you want to imagine a world where she’d gone ‘Hm, maybe this writing thing just isn’t for me’?

There’s too much success, everywhere

We don’t only lack patience, we’re also bombarded by success stories every single day. If someone shares a fail, it’s often after the fact, once they had that lightbulb moment (thank you, Edison!) and know how to get it right, or at least move on.

Falling flat on your face is never comfortable, but doing it in a world where, more than ever, failure is ridiculed and often even punished? Thanks, but no thanks, right? 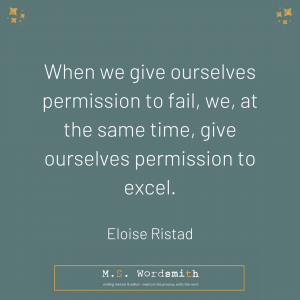 But that’s just the thing. Everybody fails. We just don’t tell anyone until we finally have that big break. After all, nothing makes admitting to how hard you’ve struggled to get there easier than being already there. Likewise, nothing gives failure more value than obtaining the ultimate proof we haven’t been wasting our time.

Because the process itself is hardly emphasised, we don’t get a real sense of how long it took someone to get where they are, and how many mistakes they made on the road.

This month, I joined Bryan Cohen’s 5-Day Amazon Ad Profit Challenge. Never having done ads before and being terrified of numbers, I had a bit of a meltdown before and during the first video.

I’m so convinced I’ll never truly understand how ads work and will waste tons of money in the process I was ready to walk away before we even got started. That every really successful indie author will tell you one of the main reasons they made it big is because they became really good at ads obviously didn’t soothe my nerves.

I didn’t run, but I was still so afraid of doing it wrong and turning out to be the only one unable to make a profit, I was on top of the numbers the first few days of the challenge. Despite numerous reminders that it takes days, sometimes even weeks, before these numbers tell you something.

As the days passed, it started to look like I was spending more than I was earning, and I froze. Did I turn them off, against better knowing—it was still too early to know for sure these ads weren’t profitable—or did I go for the deep breath, reassuring myself that it’s OK not to get it right on the first go?

I went for the deep breath and gave myself permission to fail.

Flight, fight, freeze, or fuck it?

It’s exactly how the challenge had been designed—to create a safe space for some trial and error—but someone else telling you it’s OK and that making mistakes in this process actually teaches you an awful lot only goes so far. I didn’t need Bryan Cohen’s permission to fail; I needed my own. 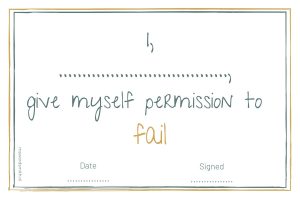 Once I gave myself permission to screw this up, my sense of curiosity and playfulness returned. My willingness to test new ads grew. I’m keeping an eye on where I am loss-wise, and I need a few rounds of deep breathing each time I log into the dashboard, but I’m no longer obsessing about needing to understand what is happening NOW, so I can prevent mistakes from being made. I also remembered how much fun it is to see yourself grow, even if it’s only a little bit.

That doesn’t mean I’m no longer struggling. Running the risk of failing is hard and I haven’t felt this uncomfortable in a long time, and that’s saying something: I haven’t seen my comfort zone since November 2017. I’m doing it, though. I took the plunge and I am learning every day. I might never become an ads expert, but I know more now than I did ten days ago, and that’s not something to be underestimated.

Give yourself permission to fail

We wouldn’t be where we are today if no one had been willing to fail. If everyone had given up when the going got a little tough. 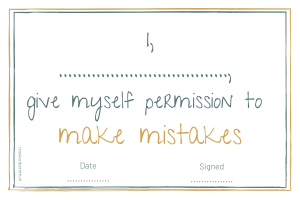 Now, I’m not saying you should give yourself permission to jump off that cliff and see what happens next. There’s no need to die trying. But, I am saying you need to give yourself permission to not get it right the first or even the tenth time. To get rejected more often than your poor ego thinks it can handle. To get that one-star review. To have to start from scratch again because there’s so many plot holes in your story there’s no way of fixing it.

It’s how we learn and evolve. It’s how we get better, even at the hard things.

So, grab a sheet of paper and write yourself that permission slip. Tell yourself it’s OK to make mistakes, that failing is the mother of success, or that we wouldn’t be anywhere without some solid screwing up. You can also download one (or both!) of the permission slips below. After sticking it to a wall where it’s visible, I’d love for you to take a picture and send it to marielle@mswordsmith.nl.

It’s time we stop seeing failing as something bad to be avoided. In the end, it’s our ability to fail—and our ability to deal with failure—that will make us succeed.

2020-01-24
Previous Post: Editing tips and tricks – The different kinds of editing explained
Next Post: The Diving into Writing Podcast- An Interview