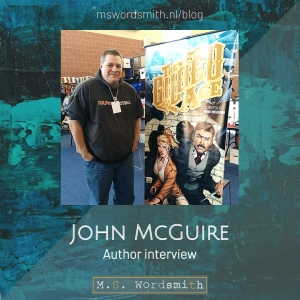 John McGuire is a writer of comic books and novels. Since the release of his debut novel, The Dark That Follows, he has gone on to co-write the Dark Fantasy series Hollow Empire with J. Edward Neill, and the Science Fiction novel The Echo Effect. On the comic book side, he is the creator/writer of the Gilded Age series from Terminus Media as well as the co-writer of The Crossing from 133art with Robert Jeffrey II.

He writes a weekly blog at www.tesseraguild.com where he talks about writing, movies, comics, and anything else that happens to pop into his head. John currently lives in Suwanee, Georgia, with his wife Courtney and two cats: Westley and Inigo.

He maintains that he would have been a marine biologist if not for the movie Jaws. 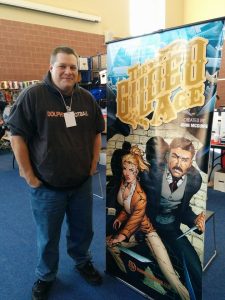 Morning, John! First things first: your cats have the best names! I just hope Inigo doesn’t go around the neighbourhood looking for cats with polydactyly… So, let’s dive in: When did you start writing, and why?

I wrote here and there when I was growing up. It was mostly superhero/comic book style stories but occasionally I’d write a story for a class assignment. Overall, it was easier to dream about writing books or comics or screenplays rather than actually sitting down and doing it. It wouldn’t be until I was in my mid-twenties that my focus changed.

I joined a local writing group when I was twenty-six, and when the first group project needed to have someone actually write it, I volunteered. At that point, I started to actually build those writing muscles, and more importantly, received direct feedback on what I’d written. 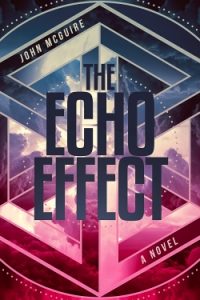 The first draft took me four months. I’d recently been laid off and wrote pretty much every evening after my wife went to sleep. I managed to finish that draft the day before I started my new job. However, since I didn’t know what I was doing, the book still took a couple of years of edits and revisions before it was finally released into the world.

It’s a science fiction novel about Aaron Anders, who is convinced that his current life is not his true life. He’s not sure how many times the world has been reset for him, but he does know that in the world before, he had a different life with a different family. And it seems that the only one who knows anything is a stranger convinced ‘They’ are after the both of them. 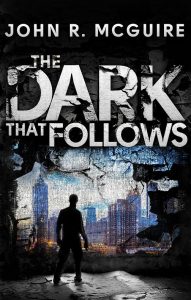 While I have a pair of books waiting for a first-draft edit, I’m currently in the process of finishing up a book tentatively titled: S.O.U.L.mate. It’s a science fiction novel set in the near future where society has discovered that Soulmates are a real thing, and those who have found theirs have become the upper crust of society. Alayna Park has hatched a scheme to fake it so that she can see how the other half lives.

I’m also finishing up the second issue of a comic book, called The Crossing, that I co-write with Robert Jeffrey II. It’s a bit of Sliders with a bit of the Fugitive mixed in with a manhunt across parallel worlds.

With my first novel, The Dark That Follows, it was 90% pantsed. Since then, I find that it’s better for my psyche to have at least a rough idea of what’s going to happen in the book prior to sitting down and writing.

When I’m really in a good rhythm I try and write about 5000 words per week, which feels about the limit since I have a 9 to 5 I have to wake up for. I normally begin between 11 and 2 in the morning and end when I hit about 1250 words for the evening. 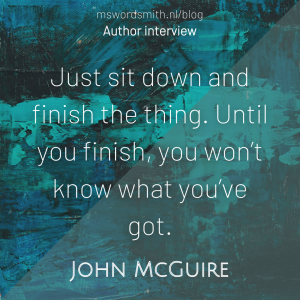 With my drafts, once I’ve finished one, I don’t look at it for a couple of months. Normally, I’m starting in on another project or finishing something else up. My hope is that when I come back to it, I can see the flaws better. The second draft is really about cleaning everything up, adding or subtracting scenes, and maybe seeding in things I realised about a character earlier in the story. After that, I do one more pass for just grammar/spelling/overuse of words, and then it is off to the editor. So, I guess it ends up being four drafts.

Making sure that I’m not distracted by the world to the point I don’t get any writing in. It’s very easy to stretch taking an evening off with suddenly having two weeks gone with nothing to show for it.

I try and keep myself accountable with the daily/weekly word counts. I try and talk to my wife or friends if I’m stuck to see if maybe I need to look at things from a different angle. 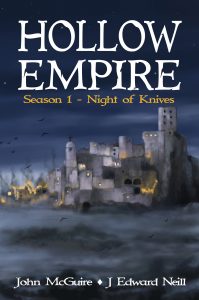 Mostly it means you’re going to have to put butt in chair and just do it consistently. Create streaks of writing. When you’ve written four or five days in a row, you’ll not want to miss a session.

It changes the same way that life does. Earlier this year, I was crushing it. Finished a novella, finished the end of a novel, finished a short story, and maybe a couple of other things… then the pandemic happened and, just like that, two months had gone by and I’d barely written anything.

I’m sure that will resonate with quite a few other writers out there… Do you prefer the term ‘writer’ or ‘author’, and why?

I don’t have a preference. I normally say I’m a writer… or I write books and comics.

OK, a few quick ones. Who’s your favourite author? 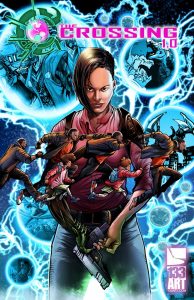 Just sit down and finish the thing. Until you finish, you won’t know what you’ve got.

Oh, I swear by that advice!

Thank you so much for being here, John, I really appreciate you taking the time out of your busy schedule for this chat.

You can find John on his website and on Téssera: A Creative Guild.