A 1982 graduate of Wabash College, Donovan majored in English and minored in not taking things seriously enough. At the time, he was concentrating mostly on short stories, but in the summer of 1983, he completed the first draft of his first novel, Bob Smith, which now resides in his mental stack of books to rewrite someday. ‘It’s got interdimensional travel to a land where Herman Melville is obsessed with the psychedelic music of the 1960s,’ notes Dono. ‘I’m hoping this market doesn’t get saturated before I have a chance to publish that one.’ 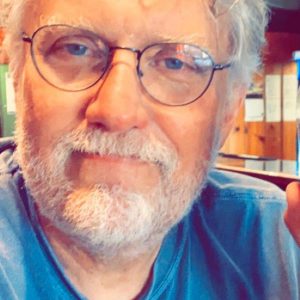 Donovan entered the world of advertising as a junior copywriter in 1985, and has on numerous occasions fought the industry’s attempts to suck the soul out of him. Working for various advertising agencies in Illinois and Iowa, he has written some award-winning print ads and broadcast spots for funeral homes, hospitals, tourism bureaus, state lotteries, and purveyors of fine hog semen. Seriously.

Hi John, welcome! Let’s dive right in: when did you start writing, and why?

When I was four or five, I wrote a Western story about a villain named Bad Sticks Sow. The whole story consisted of about thirty-five words and didn’t have much in the way of plot or character development.

What possessed me to write flash fiction about an outlaw with a weird name? I think it was a consequence of learning to read early. I’d read countless stories and just thought I’d try my hand at writing one. Fortunately, I got better at it. In third grade, I started writing mystery stories with my friends as characters, so at that point I can say I was writing specifically to entertain people. 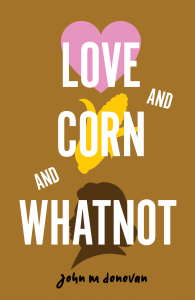 In sixth grade, I had the best teacher of all time, who not only laughed at my stories but encouraged me to write more. In seventh grade, my English teacher told me, ‘If you miss being a journalist, you’ve missed your calling.’ (I’m not a journalist, but I’ve always broadly interpreted her statement to mean ‘being a writer’.) These teachers are all part of the ‘why’.

In high school, I realised that this was what I wanted to do with my life. However, thanks to some discouraging words—‘You can’t make a living writing’—and a nagging fear that maybe I wasn’t that good, I lost sight of this dream for a while and didn’t re-commit to it until sometime in my late twenties.

When I was twenty-three, I wrote the first draft of my first novel in two months, working at a pace I couldn’t match now if I tried.

The last novel I published, Love and Corn and Whatnot, is a sequel to my second novel, Trombone Answers. This one follows our hero through his college years and then into the world of agricultural research (more aptly known as ‘corn detasseling’). 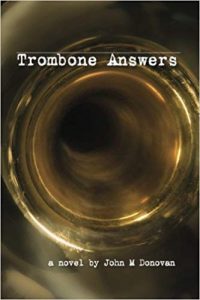 Novel #5 is a satire of professional sports. It’s just sitting there waiting to be edited. My work-in-progress is about John Cornish, who describes himself as ‘a creaky old professor’ and who might or might not be being visited by the ghosts of Jack Kerouac and his mother. The working title has always been Ghosts and Not Ghosts, but in the last couple of weeks I realised I’d be an idiot not to call it Kerouac’s Ghost.

I tend to dive right in but also to make a side list of ‘things that have to happen in this novel’. I don’t count drafts because I tend to edit as I go—I can’t just dump a bunch of words onto the screen and then go back and start over. If something isn’t working, I have to fix it. Many experts discourage this approach, and they are welcome to discourage it all they want.

I would be one of those experts, but I’m also a firm believer in ‘whatever works for you’! What do you struggle with most as a writer?

In general: Distractions and my day job, which is generally where the distractions come from.

Specific to the writing process: Occasionally wanting to do too much too fast, which can result in rushing the ending.

Specific to independent publishing: Marketing, finding an audience, getting reviews. 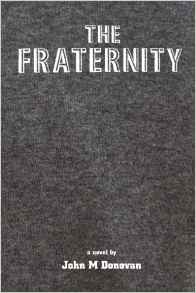 Don’t beat yourself up when the distractions keep you from meeting your daily goal. Progress is progress. One good sentence moves your story forward, and if that’s unavoidably your day’s output, you’re ahead of where you were yesterday.

I prefer ‘writer’. Anyone can be an author, but not every author is a writer. Truth be told, I like ‘novelist’.

Interesting! Usually, I hear it the other way around, but that’s because most people equate being an author with being a published writer.

Who’s your favourite author then, or writer?

John Steinbeck, hands down. I can’t even express how much I admire Steinbeck. Tied for second on my list of favourites are John Gardner, Flannery O’Connor, and Ray Bradbury.

How much time and space do we have? I love The Grapes of Wrath, but I had tears in my eyes at the end of East of Eden. Bradbury’s Something Wicked This Way Comes is right up there. The Magus by John Fowles. I was amazed at how much I loved The Forsyte Saga and at how, after 700+ pages, I wasn’t ready for it to end. 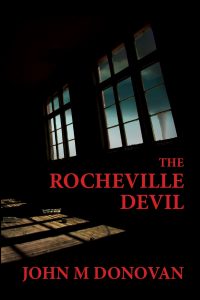 As for non-fiction: Jim Bouton’s Ball Four and Dee Brown’s Bury My Heart at Wounded Knee were life-changers.

John Gardner’s On Becoming a Novelist.

Can’t remember who said it, but someone suggested ending your day’s work in the middle of a sentence so you’ll at least have some momentum the next day. And of course, nothing helps a writer more than reading good books.

That was no other than Ernest Hemingway! I included the quote in my 52 Weeks of Writing Author Journal and Planner Vol. II:

I always stopped when I knew what was going to happen next. That way I could be sure of going on the next day.

Lovely advice, and absolutely worth a shot if you have trouble gearing up. Thanks, John!