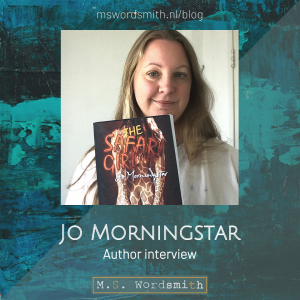 Jo is the author of The Safari Girl and a bit of an entrepreneur. Novelist, creator, and Witch, all while running a business and working a side hustle or two.

She lives in the south of England with her partner Bruce and their family of fur babies. When she is not creating with words, she is most likely crocheting or playing with metal in the form of chainmaille. You can often find her in a local café, typing away while her coffee grows cold as inspiration hits her with the same speed as the wind on her face from riding her motorbike to get there.

I can’t pinpoint the exact time I started writing, but I was writing short stories fairly regularly in my teens. I remember writing another short horror type story earlier than that, but I don’t know what age I was. Maybe late tweens? 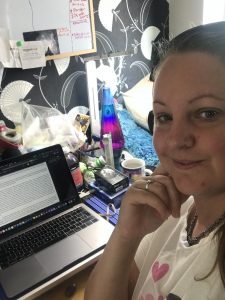 I’m not sure I take myself seriously now lol. However, I would say it wasn’t until I published my book The Safari Girl and confirmed when I started getting sales that weren’t friends and family, but I think that I will truly believe I am a serious writer when I get my first review from a stranger.

Technically, I haven’t finished my first book. I put it aside to write what I had thought would be a shorter and easier story to write so that I could get my name out there ready for my ‘first’ book. The Safari Girl is my first published book and as such would be considered my first book. It took me a few years from start to finish, but there was a period of not writing, so in reality it took maybe a year at most.

She is met by Jake who informs her that she now lives in the safari park with other women who also resemble animals such as zebra, gazelle, lions etc…

Her role now is to entertain the guests in whichever way they see fit after Jake has trained her.

The idea horrifies her and she wants to leave, but he tells her there is no way she can and her changes are permanent. 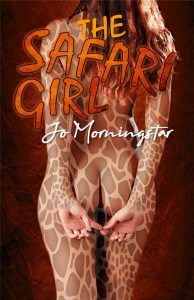 I am working on the sequel to The Safari Girl, which I hadn’t planned on writing, but my readers wanted it, so I am now writing it! It is called The Safari Girl: The Hunt.

I am also writing something very different, a kind of ‘biographical’ alien abduction comedy, My Time with The Greys.

I chop and change all the time, I tend to just dive in for the most part, but I also plot on occasions. Usually when I’m not sure how to progress or the story has stopped flowing, then I will plot a little.

I will do at least two drafts, maybe three before sending it out to my beta readers and then at least one more after getting their feedback.

Procrastination, if I’m honest. I think it is worse at the moment because life is so up and down. Just before lockdown, I had created a routine that was working well, but that routine was not possible to continue at first because they rest of my daily life had changed drastically.

I think that now I should be able to create a new routine that will work just as well because daily life has become somewhat more settled ‘day job’ wise.

Create a routine and maybe a little ritual that you do every time you sit down to write. I like to get myself a beverage, write in my journal to clear my mind, light some incense, and put some background noise on, typically café sounds or the Dalek saucer heartbeat.

Oh, I like that. I can’t write without a steaming mug of tea next to me. Have you always had that struggle or has it changed over time?

I’m a Leo, I get distracted, lol. So yeah, I guess I have always had a procrastination problem, more so when it’s something I don’t want to do like homework, lol. I think that is why TSG2 is taking longer than I had wanted it to. Not that I don’t want to write it, it just that I hadn’t been planned on it and so my enthusiasm for it isn’t quite as high as it is for some of my future projects.

I don’t have a preference I think that both work equally well, some people may think that author sounds more professional or highbrow, but to me it doesn’t matter as long as people are reading. Preferably my books, but any reading is good.

Oh my Gods, I dislike this question! There are so many great authors that I read, it is so hard to choose! I love Clive Barker, Stephen King, Shakespeare, Jules Vern. But if I have to pick a favourite, then it would have to be R. M. Rayne.

Another difficult question! Again, there are so many. How can I pick just one? It’s quite possible that my favourite book hasn’t been written yet!

I love Moby Dick by Herman Melville, Imajica by Clive Barker, and of course Dead Tempted by R. M. Rayne. 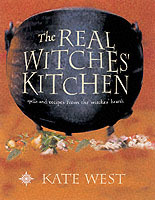 The craft of writing? I think that would have to be Write, Publish, Repeat by Johnny B. Truant and Sean Platt.

When it comes to the craft of witching, my favourite book is The Real Witches’ Kitchen by Kate West.

And one that incorporates both crafts? 52 Weeks of Writing by Mariëlle S. Smith, who of course is yourself.

Jo! Thank you for saying that! I like the idea of it incorporating both… It has been called ‘the holistic approach to writing’, after all. Thank you! OK, last but not least, what’s the best writing advice you were ever given?

The first draft is just shovelling sand into the box, the second draft is where you build your castles. Also done is better than perfect (basically a shorter version of the first advice).

Oh yes, I’m a fan of both and say them all the time. Thanks for your time, Jo, and good luck finishing your second book!

If you would like to know more about Jo, you can find all of her social media links here. To get your own copy of The Safari Girl, click here. Rather get it in paperback? Go here instead.