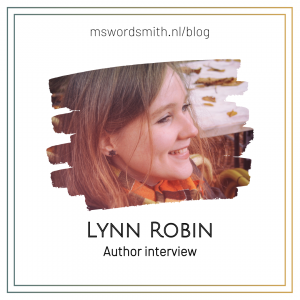 Lynn Robin (1992) is an author of Paranormal Romance Dark Fantasy novels. Born and raised in the historical city of Leiden in the Netherlands, she has felt the urge to write stories ever since she was little.

She made her debut in 2017 with her Dutch series entitled the Schimmenwereld Serie (the Phantom World series, containing six books about ghosts, angels, demons, music, dance, art, and—of course—love). With the fourth instalment, Schimmendroom (Phantom Dream), she won the Best Book of 2018 award chosen by the jury of The Indie Awards.

In 2019, she debuted internationally in English with the dark Insomnia Saga. In 2020 and 2021, she published the highly romantic Kissing Monsters series. Her latest release is The Sea of Her, a still ongoing paranormal romance series in a tropical setting.

Hi Lynn, welcome! I’m so glad we found the time to have this talk. Please tell us, when did you start writing, and why? 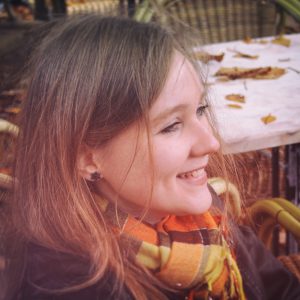 Making up stories has always been a part of my life, and something I always liked to do as a child. I couldn’t wait until I learned how to write, and once I was finally taught at school and was able to string coherent sentences together, I was often found scribbling away in a notebook, writing tales about wizards who had lost their books of spells, and possessed sunflowers with razor teeth who bit anyone who came too close (I’ve always had a pretty wild imagination!). So, I think I was about seven years old when it all started. It’s in my blood!

I know the feeling 😉 At what age did you take yourself seriously as a writer?

When I was nineteen, I finished my very first series, which consisted of four books (YA Paranormal Romance), which was also the age when I began sending out my manuscripts to publishers—this was long before I went indie. But especially finishing a series was a huge turning point for me, because I’d proven to myself that I was truly able to stick to a project from start to finish. It was really magical.

I’ve once been told that an author is someone who has published works, and a writer is someone who hasn’t (yet). I think it kind of makes sense, so I often refer to myself as an author these days, just to make things clear to others. However, I don’t mind calling myself a ‘writer’ either—especially not when I’m in Crazy Writing Mode and in the midst of a manuscript; I tend to turn really passionate instead of ‘professional’, haha! 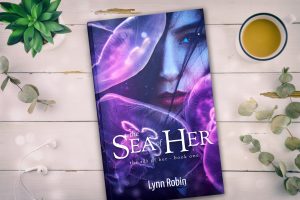 About three to four weeks. I was fourteen years old, still in high school, and worked on it little by little every day after I’d finished my homework and, of course, during the weekends. It was just a novella consisting of seventy-two pages and I’m fairly sure it was pretty bad, but whoa, I felt so proud.

The last book I’ve written is Book 4 in The Sea of Her series, which is about Leilani, a girl who weeps pearls, a young man called Keanu, whom she finds washed ashore on a stormy day bearing scars and harbouring dark secrets, an island ruled by a pair of ruthless twins, and the long-lost King of the Ocean. In Book 4, I got the chance to explore Keanu’s shadowy past, which made the book feel very dark and sinister compared to the first three. I loved working on it, and I also finally got to reveal some twists and answers that I’d been plotting and planning since the first book, which is always satisfying! The book will release in just a few weeks, on December 21st, and I can’t wait to find out what readers will think of it! 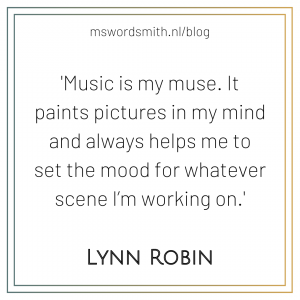 Currently I’m working on Book 5 of The Sea of Her (out of six), so I’m gradually easing the storyline in the direction of the grand finale, while discovering more surprising truths about my characters…

Isn’t it lovely what they unveil right when you think you understand them fully? *shakes head*

So what is your writing process like? Do you plot or do you just dive in? How many drafts do you go through before the work is final?

I am a major plotter. When I was younger, I used to blindly dive into a story, but really, in the end, that’s way more trouble than it’s worth!

The first thing I do when I start a new book is write down all of my ideas in a notebook. They tend to come to me in a matter of days or weeks, usually while I’m doing other things; I love a good brainstorming session while playing a video game, it works wonders. Once I’ve gathered enough, I create a Word document, write a rough summary about the most important things that need to happen in the book, then put all of my notes in the right order. After that, I write a very detailed plot outline divided into chapters, with snippets of dialogue, keywords to set the mood, and brief descriptions of locations. I suppose you could consider this as my first draft.

Then, the real writing begins, which tends to be a fast-paced process for me, because I’ve already got all the information I need and the plot outline has already helped me find the plot holes and other inconsistencies. I barely have to think, really—I just sit down, write, and enjoy the process. (If you follow my Instagram stories when I’m writing, you’ll find several ‘finished another chapter!’ updates a day, haha!)

Once the manuscript is finished, I speed-edit it in a couple of days, send it out to my amazing team, and then several rounds of revisions follow.

Well, as a teenager, every manuscript I wrote was a stand-alone. Somehow, I had no problem saying goodbye to my characters, and their story was simply finished with just the one book. This changed after I’d written my first series—ever since, I seem incapable of it! I do try, sometimes, but every time I’m working on it, all these ideas for sequels just flood my brain, and then it feels like too great a shame not to write them!

Give up and just write those entire series. Yes, really! Usually, I would never advise anyone to ‘give up’, but I believe that in the case of too much inspiration and too many cool ideas, it’s OK to let go of the idea of writing stand-alones. Personally, I prefer reading series as well, because in many cases the story and world-building are deeper and more fleshed out when there are more books. Oh, and the character development; that’s so important for me. 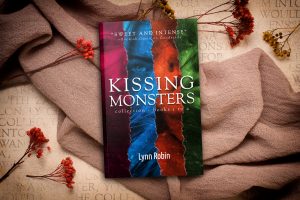 Maybe it’s less about giving up than about giving in and just going for it? Because that sounds like solid advice to me! By the way, have you ever had writer’s block?

A few times, yes, but that was simply because I dove straight into a story without thinking things through. I soon figured out that wasn’t working for me at all. So, ever since I began outlining my books in great detail, removing any obstacle and answering all questions that need answering, I’ve never had a writer’s block since.

Reading books, playing video games, watching movies and series, going for walks; I love nature—the scent of pine trees, gentle birdsong, the wind rustling through leaves. And listening to music: that is my muse. It paints pictures in my mind and always helps me to set the mood for whatever scene I’m working on.

I’ve got way too many, but I’ll just pick four that come to mind right now: Laini Taylor (her writing is absolutely magical), Darren Shan (his books have had a great impact on me when I was younger), Makoto Shinkai (his movie novelisations of Your Name and Weathering With You are absolutely lovely, I love his philosophies and that his stories always give you a sense of hope), and Paula Weston (she’s one of those authors capable of creating characters who truly feel alive).

Shadows by Paula Weston, which is the first of the Rephaim series. It has really helped me through some difficult times. The main character, Gaby, struggles to overcome her insecurities, but she does and she’s just badass. Also, amidst all the chaos and action, there are many scenes in which the characters just hang out at a bar or at the beach, and they’re so relaxed and fun, it really helped set my mind at ease. It was a way for me to escape. Books are just magical that way.

Actually, I’ve never really read one! I skimmed through one, once, and it gave all these tips on creating characters, choosing the right names for them, finding their voices, how to structure your story… and to me it just felt like I was reading things I already understood and had already been applying to my writing for years intuitively. Next to that, I don’t believe there is a ‘right way’ or a ‘magic formula’ to writing books—you simply have to find what works best for you, as well as your current project.

‘Read and write a lot.’ It’s overused, it’s cliché, but it is oh-so-true! You learn the most from reading other’s works, and you can only evolve as a writer as long as you keep on writing.

Thank you so much for this, Lynn! It was great talking to you!

Her books can be found on Amazon, GooglePlay, and Barnes & Noble.

2021-12-06
Previous Post: Do you get your arse in that chair easily?
Next Post: If you're not feeling it, your readers won't either