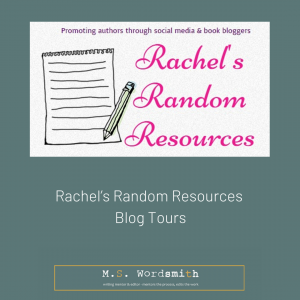 Last month, I had my first virtual book tour. I had about zero expectations going in, but I did have hopes and dreams…

…and the results exceeded those in the extreme.

Which is why I can’t wait to share my results with you, and urge you on to try it for yourself.

One of my writer friends, Lasairiona McMaster, has been on such a roll. Ever since I met her, Las has published five romance books and she has another three up for pre-order.

With every release, she kept posting about her ‘virtual book tour’ and the amazing reviews she got during it. 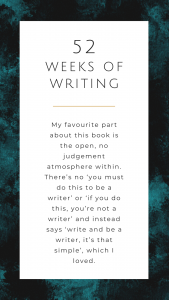 Obviously, I had to ask. Getting reviews is one of the hardest parts of being an author—I once read 1/ 500 readers actually reviews your work, which is a pretty horrifying number—so what was Las’s secret? (And what the hell was a virtual book tour?)

Rachel’s Random Resources—that was her secret. And where she got her virtual book tours.

Rachel’s Random Resources. With every book release, Lasairiona did one of Rachel’s blog tours. In the week surrounding her books’ publication dates, various bloggers reviewed the book in question on their blog.

As soon as the reviews came in, she went through them, collected some of the best quotes and then turned those into pretty graphics she then used on her social media channels to promote her new work some more.

And it cost her next to nothing, or so she said.

Although I had no intention to use the resource for my own co-written romance at the time, I did make me curious. Would something like that work for non-fiction? In particular, would it work for my 52 Weeks of Writing Author Journal and Planner?

Looking at the Rachel’s Random Resources website, it did quickly dawn on me that her services were very much geared towards fiction. All of the examples I came across were fiction books (which included a novel by Self-Publishing Formula’s Mark Dawson!). However, my curiosity won—as it does—and I decided to email Rachel and ask. Surely, if she didn’t think 52 Weeks of Writing was a fit, she’d tell me?

When Rachel got back to me, she recommended we do a 1-day blog blitz, which to me sounded like a cross between her Publication Day Push and her Book Birthday Blitz, both one-day virtual book tours to get some (new) eyes on your work and create a buzz. 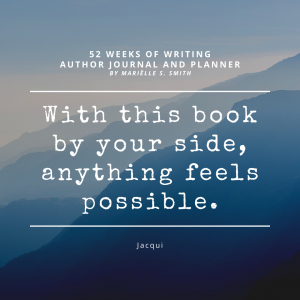 She was positive my type of book would work with her network of bloggers, and having gone through her website, I knew I would get my money back if it didn’t attract enough interest. Neither the Publication Day Push nor the Book Birthday Blitz said anything about what that minimum was, but some of the other blog tours hosted by Rachel’s Random Resources have a minimum of either five or seven participants. If it didn’t reach that threshold, you’d receive 90% of your money back.

I obviously hoped for more than five reviewers, but since the one-day blog blitz would only cost me £42.50, I knew it was worth the risk anyway.

What happened next was that Rachel created a page for 52 Weeks of Writing and sent it to her mailing list—click here if you want to take a look. As you can see, it weren’t just five or seven bloggers who signed up to receive a review copy.

I don’t know who was more surprised, me or Rachel, but when she emailed me thirty-three bloggers had requested a copy of the book, I couldn’t be happier. That’s an awful lot of visibility for just £42.50! 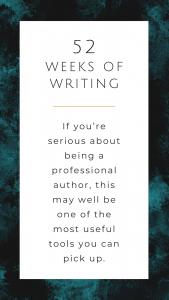 Because I agreed to being willing to provide additional content—Q&As, guest posts, extracts, and such—I also wrote two guest posts and gave a few bloggers a couple of pages from the journal and planner to put up on their websites. This is purely optional, but I thought it would be a great way to increase my visibility even more and have my voice heard while I was at it.

Of course, I had no idea who these bloggers really were and what their reach was, but still. I also had no idea which of them would actually leave a review, but thirty out of thirty-three ended up writing about 52 Weeks of Writing on their blogs. That, too, surpassed my hopes and dreams.

But there was more…

Although 52 Weeks of Writing has been received extremely well since it was published, I was still nervous. What if none of them liked it? Would they review it anyway and tear me up, or would that leave me with only a handful of reviews by those who did consider it somewhat useful?

Although there was some criticism—mostly about the book working best as a paperback, which I know. I only created an eBook version because I wanted it to be available to those with limited funds—the overall enthusiasm expressed in those thirty reviews blew me away. (Some even had me cry.) 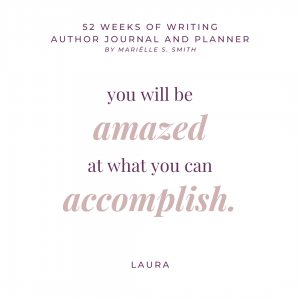 I had set some time apart on the day of my 1-day book blitz to create some images for Instagram and Facebook, but I eventually spread it out over the next couple of days. There was just too much I could use, and in different ways.

Something else I hadn’t seen coming was that quite a few of these bloggers also left reviews on Goodreads and Amazon. In some cases, they did both!

The last review was posted two weeks after my 1-day blog blitz, so who knows? Some more reviews might still come in.

Combining it with a giveaway

When brainstorming with Rachel about the best day to do this 1-day blog blitz, I eventually settled on the 17th of March. It was the 17th of March when I had M.S. Wordsmith registered as an official company in 2014 and I’ve been celebrating the day ever since. It seemed the perfect day to create some buzz around my work. 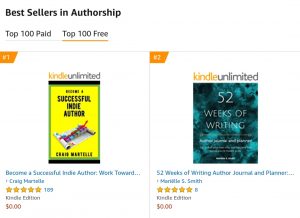 And, since I was already contemplating doing another big giveaway around the anniversary, I decided to combine the two.

Part of the giveaway was having Free Book Promotions on Amazon for all my non-fiction books. The promotion for 52 Weeks of Writing started on the 16th of March, a day before the 1-day blog blitz, and would last for five days. Aside the book tour, the only other place I promoted the giveaway was through Instagram and Facebook.

As you can see, putting the tour and the giveaway together yielded some amazing results:

Can you imagine my excitement? Not only did I almost surpass my own goal of giving away hundred copies in total—which was the goal I set for each book—on the first day, as soon as the reviews hit the internet, 52 Weeks of Writing really gained momentum. 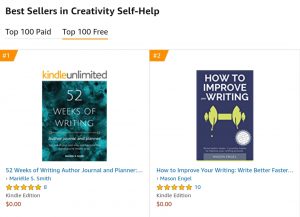 In the end, I gave away 1107 copies of 52 Weeks of Writing. That’s eleven times my initial goal.

As always, community plays a vital role in our success and it did here as well. Facebook refuses to tell me who shared my many posts about this particular promotion exactly and how often, but many of my author friends showed their support in this way. 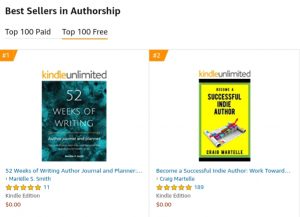 It also didn’t hurt that Craig Martelle, best-selling author and organiser of the 20Booksto50K conferences, shared the link to 52 Weeks of Writing with his Facebook friends on the last day of the promotion. And that was after I bumped him to #2 in our shared Authorship category 😉

Another, and very unexpected, plus of doing the Free Book Promotion together with the 1-day blog blitz was that some of the reviewers got themselves a copy of the book. As such, their Amazon reviews are classified as Verified Purchases.

Want to try Rachel’s Random Resources for yourself?

Know that you have to book your blog tours at least two months in advance, and even sooner if possible. As my own example shows, there’s a certain flexibility around the options that Rachel offers. Ask if you have something specific in mind or aren’t sure whether the existing options work for your particular book. 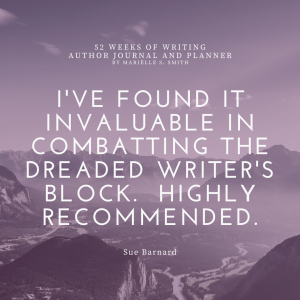 Rachel’s has been exceptionally helpful throughout the entire process, so don’t feel weird about approaching her.

Rachel’s Random Resources also offers a lot more than ‘just’ blog tours. Lasairiona and I have created our own so-called ‘quotables’, but if that is beyond your comfort zone or skillset, Rachel offers help with that as well. Whether you want quotables, blog tour banners, header graphics, or Twitter images, she has your back.

She also has premium packages for your publication day, cover reveals, and recently added a new service: the Share the Book Love Social Media Blitz.

I know I will try her services again soon, and I strongly advice you to check her out as well. Speaking of getting your money’s worth…

Please note: right before hitting ‘publish’ on this post, Lasairiona informed me that Rachel of Rachel’s Random Resources has contracted the coronavirus. I don’t know how she is doing; all I know is that she might not be as responsive these days.

I suggest you still check out her marvellous services. Just know she might take a little longer to respond.

In the meantime, let’s all hope she recovers swiftly and send our love and well wishes to her and her family.

2020-04-06
Previous Post: Bradley Charbonneau's Spark - An interview
Next Post: To hyphenate or not to hyphenate - Editing tips and tricks