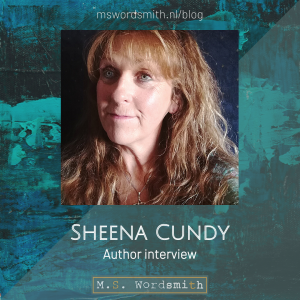 She is the author of The Magic of Nature Oracle – a spiritual guidance tool – and The Madness and the Magic witch lit series, out in box set now. Book 1 was the debut novel she wrote to keep out of prison, a straitjacket, and the divorce courts while battling with dodgy hormones during a midlife crisis. Bonkers and Broomsticks and Chaos in the Cauldron followed.

She is currently writing the first in a magical non-fiction series, The Witch Wavelength, and an Arthurian-based mythic fantasy, Grail Maiden.

Mostly, she divides her time between the Treehouse (office and reading room) at the bottom of her garden and a seventh century Saxon chapel on the beach, just a dog walk away. Inspiration for her writing comes from the magic of these two special places…and when she is not writing or performing, she can be found cooking all-day breakfasts for two teenage sons at the Cundy cafe or spaniel herding out on the land. 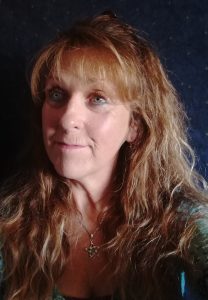 Hi Sheena, welcome! Let’s dive right in: when did you start writing, and why?

It started with poems and letters as a kid. I won a poetry competition at eleven years old and wrote letters to my friends. The letter writing continued, as I led a nomadic life initially, and pre-internet it was the only way to keep in contact with people! I still write letters to a friend of mine in the next village. You could say it’s been my apprenticeship as a writer plus a great way to communicate with others.

I’ve had a few poems and articles published over time, but it wasn’t until my husband talked me into turning the poetry into songs and encouraged me to come out of the closet and sing, that I discovered a direction for my writing. We performed our own songs as a duo for a few years around the pubs and clubs, and at festivals…and then in 2014 we formed our own band.

Nothing gives me greater joy than writing the songs and performing them with our good friends, the members of Morrigans Path.

After that, I did a creative writing course at our local library and decided I wanted to be published. I didn’t know how that was going to happen. I only knew it would, somehow.

Three years, I think. I did NaNo in 2012, wrote 50k in a month and then spent ages tarting it up! I was published by Moon Books (a pagan imprint of John Hunt Publishing) in 2015 and got the rights back to that first book in 2019.

My last book was the third in the Witch Lit series I have just been making into a box set and uploading to Amazon today! The first was the NaNo entry I mentioned, and followed in much quicker succession by books 2 and 3.

The series is about a crazy menopausal witch called Minerva and her ridiculous antics to snare the local guitar playing vicar. I pulled the idea out of the ether with no time to plan just before NaNo with that first book. I had to write about what I knew, so yes, it’s semi-autobiographical. But what fun I’ve had writing it! It was the perfect remedy for my midlife crisis at the time (the peri-menopause was not kind to me) and the best way to turn things around.

Basically, I took the mickey out of myself through a character…which was incredibly entertaining and healing. I highly recommend it.

I’m writing the first in a non-fiction witchy series, The Witch Wavelength – Tuning in to Your Magical Nature. I’m excited about it because it’s an expansion of the guidebook I wrote for The Magic of Nature Oracle – a divination card deck I self-published with my sister, who’s an artist.

I teach magical/spiritual development and mentor students online at the moment, so I’m writing with them in mind. I have my cover done and an editor booked for the beginning of April. Now all I have to do is get it written! I’m planning short books that I can publish fairly quickly to get some momentum going. 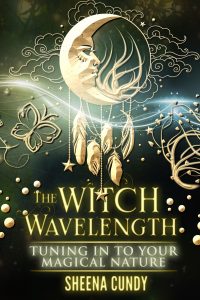 Sounds like a series I need to keep my eye on! So, what is your writing process like? Do you plot or do you just dive in? How many drafts do you go through before the work is final?

I’m a pantser really. I wrote that first book without a plan and ran with it. Books 2 and 3, I had a bit more of an idea but only a few notes on the main points of the stories. Once I know my characters, it’s a case of putting them into situations and imagining what they’d do.

I wouldn’t go so far as to say, ‘the books write themselves’, because they absolutely don’t. Last year, I actually hired a book coach because I was advised to write (to market) in a new genre and I thought I’d treat myself. Christ, I’ve never had to work so damn hard. It’s an Arthurian-based mythical fantasy and my coach is very good, but he puts me through the mill.

I planned that book and outlined it until I was so bored of it all, I had to say to Daniel, ‘I need to start writing this story now or I’m outta here.’ I needed to learn how to plan, there’s no doubt about that, but I don’t want to know the whole story beforehand. Where’s the fun in that?

Anyway, I’m 100k in and hoping to finish the first draft in the next few months. Who knows how many drafts it’ll take…I have no idea. I think it’s different for each book, and the fact that I’ve never ventured into this territory before will determine my journey with it.

Time. There’s always that feeling of never having enough!

Rationally, that doesn’t make a lot of sense now, because I have more time than ever to write. Just over a year ago, I lost my Mum to dementia, and for two years prior I had been her primary carer. I had to fight for my writing time but I managed it somehow, when I could.

And prior to that I’ve had my two sons to bring up, and motherhood is time-consuming! But now the boys are older (although still living at home), they are less demanding although the washing machine rattles away most of the day and they eat us out of house and home.

I try and plan my days, schedule my time into blocks, and it works for a bit but then I have a project that seems to require more time, and so I commit to that – and the schedule goes down the drain.

For example, this box set I’ve been working on has taken far longer than I thought it would. A friend of mine said, ‘I can do that for you in Vellum.’

Without going into too much unnecessary detail, let’s just say it’s been a huge lesson on many levels. But I have a good-looking product, I think, which has been my intention from start to finish. I just didn’t realise how much pain would be involved!

I am so glad it’s done now because I can get back to my other projects. One at a time!

I feel you! I have a friend who said ‘I can do that for you in Vellum’ a while back and we got the project finished just before losing our minds. Yesterday! We have a few more planned, though, but we’re taking a break… I haven’t even told her I want to start box sets yet 😉

That’s a great question. I’d say make your plans realistic, based on common sense with a clear vision of your goals, whatever they are.

I am ambitious and consequently expect far too much of myself. That is a recipe for burnout. I’ve been there many times and do try to avoid it. But I get all fired up with ideas and projects and, like a runaway horse, I’m out of control in no time!

I tell myself (as I do others) it’s okay to rest, nothing in nature blooms all year round. The creative process is cyclical, and we have to find our own rythmn. Aligning with the seasons helps me, and I spend a lot of time outside in nature (I have three mad spaniels to walk every day). And we live by the sea in a very rural environment, which helps to recharge the batteries.

So yes, take time out for rest and renewal. Fill that creative well with plenty of reading and watching good films or series – let’s face it, most of us have had more time this last year. Do whatever takes your fancy…but do what makes you feel good.

That’s another good question! I don’t recall always having this anxiety about time, but if I don’t nip it in the bud now it could get worse, I suppose. Having said that, I work better with a deadline, nothing like it to focus the mind! I think the key to it is to be mindful and practise being present as much as possible. As writers we spend so much of our time in our heads and certainly if we publish ourselves, there’s a thousand and one hats to put on for each different job. So, I think it’s wise to strive to be as organised as you can without going against what feels comfortable and within reach.

I don’t really care to be honest. I tend to call myself a writer most of the time because it better describes the fact that I am a songwriter also, and not just an author.

At the moment it’s Phyliss Curott because I’m reading her books on witchcraft and really enjoying her writing. It will change when I read something different. I don’t really have favourites as there’s always someone new to discover!

The same goes for books, but if I could choose one that has made an impression on me in the last year, it would be The Song of Achilles by Madeleine Miller. What a stunning piece of work. Just beautiful writing, and I loved it.

When I was planning my Arthurian novel, I bought all kinds of books on the subject, and most of them were so complex and technical I lost heart. I don’t like the feel of having such a mechanical approach to something that for me is a magical process. So, I prefer the books told in story form, which to me are easier to understand and far more interesting! On Writing by Mr King, and I really enjoyed The Fiction Formula by Sean Platt and Johnny Truant.

When my dear Mum was ill and I was looking after her most of the time…a writer friend told me not to worry about not being able to do it all. ‘Do what you can, when you can, Sheena,’ he said. And I have never forgotten that.

It’s timeless wisdom no matter what our situation or circumstances.

I couldn’t agree more with your friend, and I’m glad you took it to heart, Sheena! Thanks so much for your time!

You can find Sheena on her website and if you want to listen to Morrigans Path, check out their Bandcamp page. Her brand-new witch lit box set, featuring all three of her Madness and Magic books, can be found here.