Writing Diversity II - Essentialism, or reducing people to their nature 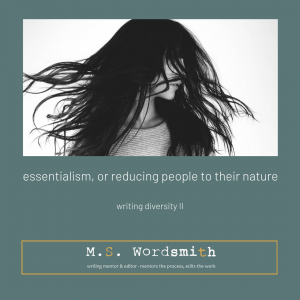 Diversity is a hot topic within the literary world. As a teacher of Gender and Post-Colonial Studies, the question of diversity and its representation within literature is at the forefront of everything I teach, read, and write. Even though the larger part of the canon is still made up of white heterosexual men who write about other white heterosexual men, things are gradually shifting. Self-publishing is doing a lot to alter the gender dynamic: more women are successfully self-published than men, and I have high hopes for self-publishing to open the way for non-white and non-heterosexual writers as well. Next to that, more writers are becoming increasingly aware of the necessity to include a more diverse array of characters in their work.

This last issue is the focus of my new blog series on Writing Diversity.

Each month, I will address the complexity behind the portrayal of diverse characters in our work by diving deeply into a variety of topics, including representation, tokenism, gender, race/ethnicity, sexuality, and so on. This month, I discuss the subject of ‘essentialism’, from what essentialism is to why it is problematic to attribute our characters with essentialist traits.

Essentialism is the assumption that groups, categories or classes of objects have one or several
defining features exclusive to all members of that category. Some studies of race or gender, for
instance, assume the presence of essential characteristics distinguishing one race from another
or the feminine from the masculine. (Bill Ashcroft, Gareth Griffiths and Helen Tiffin 2013

Essentialism is when particular human traits or characteristics are treated as essential qualities inherent to a particular group of individuals. These traits are assumed to lead to certain behaviours and choices, which are also deemed ‘natural’ or biologically determined. Despite it having been proven time and again that most human traits are cultural and not ingrained within our DNA, i.e. nurture, many of these traits are still believed to be biologically determined, i.e. nature. In other words, we still expect certain groups to behave in certain ways and make certain decisions.

Nothing in our DNA

There is nothing in a woman’s DNA that makes her a better caretaker than men, and there’s nothing in a man’s DNA that makes him a better breadwinner, yet there is this assumption that women will want to stay home to take care of their children and the household, and that men would rather not. In most (Western) families, men are the ones generating more income, and we don’t have to deny that fact in our stories. But, if we continue to write our male characters as career men and the women as those who sacrifice their ambitions without question—if they had any beyond becoming a mother—we do deny the fact that this theme causes lots of fights and compromises in real families and might lead to our readers not feeling heard. Worse, it might make them believe something’s wrong with them.

Likewise, there’s nothing in a gay man’s DNA that makes him a self-involved drama queen who can’t commit to anything. Yet, if we believe that gay men are prone to being dramatic and don’t take anything but themselves seriously because, well, they’re gay, this leads us to expect certain choices and kinds of behaviour from them. (This expectation explains the plethora of cringe-worthy gay sidekicks we see, for example, in popular cinema.) I’m not saying that this type of gay man doesn’t exist, or that gay men never don the mask of the self-involved drama queen, but if this is the only way we know how to write gay men, we not only perpetuate a rather harmful stereotype, but we also alienate our gay readers.

To give a few more examples:

Whenever we write a character, we should always go back and make sure we didn’t give them certain particularities or have them behave in certain ways just because they are gay, lesbian, white, black, Hispanic, Asian, young, old, poor, rich, and so on. They can be or behave like that, but it serves our stories to give them solid reasons and explainable circumstances for being this way or acting that way, one that goes beyond biology.

If we believe people are determined by their biological make-up, the way the world functions and our positions within that world can hardly be changed. If existing power relations are there because there is some inherent logic in our DNA that defines our place and role within society, it becomes rather difficult for anyone to question the status quo, let alone challenge it outright.

To give you some examples: for the longest time, pseudo-scientific explanations have been used to classify black people as not really people because of particular biological differences between the white and the black races, such as skull size. These ‘inherent qualities’ determined that the latter was less human than the former and that it was therefore natural to not give black people the same rights as white people. If you are deemed less human by the dominant race, and they have come up with elaborate biological arguments why you aren’t, it becomes much more difficult to fight for equal rights.

Similarly, one of the reasons it took so long for white women in the West to get the vote was because it was believed that women were unfit to make rational decisions because they have a different anatomy from men—because of their wombs, women are prone to ‘hysterical’ fits.

Even though we now understand that these ‘scientific’ practices shouldn’t be taken too seriously—as it turns out, race doesn’t truly exist, and we quickly realised during WWI that hysteria wasn’t something reserved for women—we haven’t yet been able to shed these former beliefs entirely. Not only are essentialised stereotypes still running rampant within society, there are still people who believe it proven that black people are less human than other humans and/or that women can’t make important decisions all by themselves because their emotions will always get in the way. Where these are rather blatant examples, there are so many assumptions about ‘the other’ in our collective unconsciousness—the instincts, the archetypes, the stereotypes, and other beliefs we share with our community—that it cannot but pay off to take a closer look at how we portray our diverse characters within their specific worlds.

How does essentialism keep us in place?

As long as we believe that biology is destiny, and we portray our characters in an essentialist way, we sentence them to a set of traits they won’t be able to overcome. Unless, of course, they transcend their ‘nature’ and distance themselves from whichever group they feel they belong to. If this is who they are or want to be, they must be less of a woman or less of man, less black/white, less orthodox/secular, less gay/straight, and so on than the others in their community.

For example, if being a woman means wanting to have children at some point in your life, not wanting to have children means being less woman than other women. There are women who don’t want to become mothers in literature, but this wish is often explained in terms of some former trauma that has ruined the woman’s faith in humanity, her own maternal abilities, or what have you, underlining again how natural it supposedly is for women to want to have children. If there is no trauma to be found, her womanhood itself is questioned. Because how can you both be a woman and not want to be a mother? Within literature, we are so in need of both female characters who consciously decide to have children, and those who don’t want to become mothers simply because they don’t want to.

Consorting with the enemy

Next to having to embrace the fact that we are less this or that than the other members of our community if we want to overcome our ‘destiny’, there’s also the fact that some traits are always valued higher than others in society. Rationality is often valued over emotion, speed over being slow, ruthless over compassionate, extraversion over introversion, to give just a few examples. When such traits are considered biological essences belonging to this rather than that group of people, we inadvertently create a solid hierarchy between our different characters. To get out of this trap, our characters have to prove not only that they are less (gay, black feminine, etc.) than those belonging to their community, but also that they are worthy of being considered more like those who occupy a dominant position.

If one of our black male characters, or gay male characters, or black gay male characters wants to climb the career ladder, they do not only have to prove to those in power that they don’t possess all those group traits that are supposedly holding them back—being prone to irrational behaviour, being easily offended, being too (in)sensitive, et cetera—they at the same time have to prove how similar they actually are to the white, straight men in power. In many stories featuring a character who wants more than what society expects of him/her, we see these characters struggle with the need to disavow their heritage to be able to ‘consort with the enemy’.

While this might make for an interesting character, it only underlines the fact that those who do break away from their so-called ‘fates’ are the exceptions to the rule. No matter how positive our representation of this individual character, we at the same time reduce the rest of this character’s community to their essence, to their inability to escape their DNA. We might think such characters provide good role models for our readers, but turning our characters into such unnatural exceptions actually makes it harder for readers to identify with them. Especially since it says so much about everyone else belonging to that community.

Stable and fixed versus fluid and open to change

If we, within our writing, understand group traits not as biologically inherent, i.e. stable and fixed, but as culturally developed, i.e. fluid and open to change, we allow for inner diversity within communities. Because of that inner diversity, our characters might not have those traits that they need to overcome, despite belonging to a certain cultural group. If they do have those traits, they won’t have to distance themselves from their communities in order to overcome them: if inner diversity is allowed, they can be both this and that. They can be black and a pacifist. They can be Asian and into basketball. They can be a woman and a breadwinner.

Of course, we can turn some of our characters into essentialists—it’s a great way to show what they’re made of and many, if not all, people harbour essentialist thoughts in varying degrees. It could add plenty of tension and conflict to our stories, as long as we don’t let them get away with it.

Over the next couple of months, I will further unravel the question of how to make diverse characters present within our work. I have a set of topics to be discussed planned out, but if there is any issue you want me to comment on or dedicate a post to, leave a comment here or drop me a message at marielle@mswordsmith.nl.

Hit this button if you want to subscribe to my RSS feed!

(The Amazon links in this post are affiliate links, which means I receive a small percentage if you buy through these links.)