Writing Diversity I – An introduction to representation 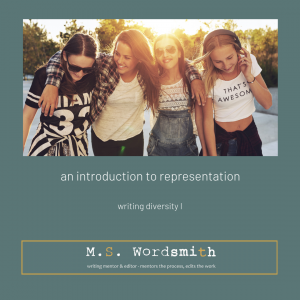 Diversity is a hot topic within the literary world. As a teacher of Gender and Post-Colonial Studies, the question of diversity and its representation within literature is at the forefront of everything I teach, read, and write. Even though the larger part of the canon is still made up of white heterosexual men who write about other white heterosexual men, things are gradually shifting. Self-publishing is doing a lot to alter the gender dynamic: more women are successfully self-published than men, and I have high hopes for self-publishing to open the way for non-white and non-heterosexual writers as well. Next to that, more writers are becoming increasingly aware of the necessity to include a more diverse array of characters in their work.

This last issue is the focus of my new blog series on Writing Diversity.

Each month, I will address the complexity behind the portraying of diverse characters in our work by diving deeply into a variety of topics, including essentialism, tokenism, gender, race/ethnicity, sexuality, and so on. In this first post, I will go a little deeper into the question of representation, the two steps representation is made up of, and the reason why it is important to consider both these steps when we bring diverse characters into our work.

Representation – Why does it matter?

The concept of representation is taken to refer to the act of making present what is absent in
reality or in language and culture. (Buikema 2009, 72

Even though fiction is becoming more diverse as we speak, the larger part of the literary canon is still made up of a very select group of authors and characters. The literary canon being the way it is, it will be difficult for the majority of people around the world to identify with both the authors within this canon and the characters that are included in their work. As such, not everyone is fully or equally represented by these stories.

First of all, representation in general is lacking—i.e. there are far fewer characters to identify with when you don’t belong to that very select group. Secondly, the representation itself is often problematic—i.e. those we would like to identify with are portrayed in negative and/or stereotypical ways. As such it is not enough to just look at our willingness to include characters we don’t often read about; we also have to look critically at how we are including them. I will come back to this shortly.

Representation – How does it work?

In representing something or someone, you always make present more than what is actually there. When you write about a particular individual, you simultaneously write about the people who might identify with this particular individual, especially if this character is the only representative of a social group within the entire story. This isn’t always done on purpose—I’d say it usually isn’t—but the fact remains that if you write something about someone, readers will wonder what you are trying to say in general about the group this someone belongs to.

As I briefly pointed out earlier, representation involves two steps. First, there is the issue of presence and absence: who is made present and who isn’t? Secondly, there is the issue of how we make someone present. It’s one thing to add certain characters to our stories, but it’s another not to repeat problematic stereotypes in our attempts to bring more diversity into our work.

If they are already included, or if we are planning to include them, the next question we can ask ourselves is how many of these characters are (going to be) present? Is it just the one character, or are there multiple minority characters? And do we include one or more people of a specific group? Is the story about them or do they rather feature as sidekicks? Do they have an actual function within our plots or do they belong somewhere in the background? If we want to make a real effort, is it enough to sneak in a single homosexual character or someone belonging to an ethnic minority?

How to make other voices present

Once we have made our stories more diverse, the next question arises: how are we representing these characters? That we are writing about diverse characters doesn’t automatically mean we are doing a good job portraying them. Each society comes with its own set of archetypes and its corresponding stereotypes, and it has been shown time and again how difficult it is to counter or break down these ‘types’ and provide alternatives. No matter how dedicated we are to becoming more diverse in our writing, we will always have to consider how we are describing these characters, what roles we are allowing them to play, and how much room we give them to grow within the story.

If the women in our stories cry all the time while the men remain rational under even the most difficult circumstances; if the male homosexual characters are flamboyant while the lesbians are super tough; if the black and/or Mexican characters have criminal and/or violent tendencies and need to be put in their place by the white heroes of our stories, we could argue that we have indeed included other voices. We have. But, in the end, the way in which we have included them might do the people belonging to these social groups more harm than good.

This is precisely why it is important to consider both aspects when we are trying to make our writing more diverse. Representation is not only about who we make present, it’s also about how we make them present and we should think through both steps when we make our work more diverse.

Over the next couple of months, I will further unravel the question of how to make diverse characters present within our work. I have a set of topics to be discussed planned out, but if there is any issue you want me to comment on or dedicate a post to, leave a comment here or drop me a message at marielle@mswordsmith.nl.

Hit this button if you want to subscribe to my RSS feed!

(The Amazon links in this post are affiliate links, which means I receive a small percentage if you buy through these links.)

2017-02-13
Previous Post: January – On grading, research, and knowing when to give in
Next Post: February - And here I was thinking January was crazy...